Easy A actress Amanda Bynes is ready to make a comeback 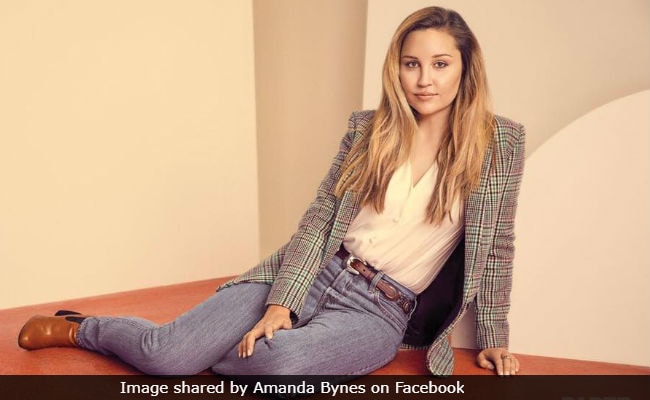 Gracing the cover of Paper magazine's 2018 "Break the Internet" issue is a fresh-faced Amanda Bynes. Dressed in a plaid suit jacket over a simple white button-down blouse and blue jeans with her honey-blond hair falling casually over one shoulder, the 32-year-old former Nickelodeon star exudes confidence - looking every bit like the successful Hollywood starlet fans hoped she would become.

It's been almost a decade since the actress announced her retirement, and those years have been marred by a number of arrests and a public breakdown complete with bizarre Twitter rants, bad wigs and even a brief stint in a psychiatric hospital.

Now Amanda Bynes, who is pursuing a degree at the Fashion Institute of Design And Merchandising, is determined to show that she's ready to make a comeback, reaffirming her goal to return to acting. She opened up about her tumultuous past to Paper's executive editor, Abby Schreiber, for the magazine's cover story, published Monday. Amanda chronicled struggling with her appearance and substance abuse - "It became a really dark, sad world for me," she said - and repeatedly expressed remorse for the erratic behavior that fueled her swift descent from perfect child star to tabloid fodder.

"I have no fear of the future," she said. "I've been through the worst and came out the other end and survived it, so I just feel like it's only up from here."

Amanda Bynes, long praised for her comedic timing, skyrocketed to fame in the mid-'90s after earning a spot on Nickelodeon's popular show All That, a Saturday Night Live -inspired comedy sketch series for young people. Just three years later, at age 13, she was the star of her own wildly successful show, aptly titled, The Amanda Show. She went on to launch a film career, starring alongside the likes of Frankie Muniz (Big Fat Liar), Colin Firth (What A Girl Wants), Channing Tatum (She's The Man), and John Travolta and Zac Efron (Hairspray).

Described by her brother in a 1999 Los Angeles Times article as "an ordinary kid," She was by all accounts a wholesome child, who, despite her fame, never adopted a "Hollywood attitude."

"I started smoking marijuana when I was 16," said Amanda, who has now been sober for almost four years. "Even though everyone thought I was the 'good girl,' I did smoke marijuana from that point on."

Bynes added: "I didn't get addicted (then) and I wasn't abusing it. And I wasn't going out and partying or making a fool of myself ... yet."

The drug Amanda did abuse was Adderall, a stimulant commonly used to treat attention-deficit/hyperactivity disorder and narcolepsy. She also said she experimented with the drug MDMA (also known as molly or ecstasy) and cocaine.

Amanda said she was filming the 2007 film Hairspray when she read a magazine article touting Adderall as "the new skinny pill' and they were talking about how women were taking it to stay thin. I was like, Well, I have to get my hands on that."

In a 2013 tweet that has since been deleted, Amanda wrote that she had an eating disorder, which caused her to "have a hard time staying thin," HuffPost reported.

She also told Paper that seeing herself dressed as a boy in the 2006 romantic comedy "She's the Man," loosely based on Shakespeare's Twelfth Night, was a "super strange and out-of-body experience" that put her "into a funk."

"I went into a deep depression for 4-6 months because I didn't like how I looked when I was a boy," she said. "I've never told anyone that."

After "faking the symptoms" of attention-deficit disorder to get an Adderall prescription, Amanda said, she "definitely abused" the drug.

In fact, it was the effects of Adderall that led to her abrupt departure from the 2011 film Hall Pass. Bynes said she used to chew Adderall tablets in her trailer because she thought it would help her get higher.

"I remember chewing on a bunch of them and literally being scatterbrained and not being able to focus on my lines or memorize them for that matter," she said.

Though it was reported at the time that Amanda had been fired from the movie, the actress said she chose to leave as a result of "being so high that I couldn't remember my lines and not liking my appearance."

"I made a bunch of mistakes but I wasn't fired," she said. "It was definitely completely unprofessional of me to walk off and leave them stranded when they'd spent so much money on a set and crew and camera equipment and everything."

Amanda said personal issues with how she saw herself on camera was a large part of why she decided to retire, adding that the revelation came during a screening of her last film, Easy A, which was released in 2010.

"I literally couldn't stand my appearance in that movie and I didn't like my performance," she said. "I was absolutely convinced I needed to stop acting after seeing it."

High on marijuana when she saw the movie, She said she didn't know "if it was a drug-induced psychosis or what, but it affected my brain in a different way than it affects other people. It absolutely changed my perception of things."

The actress then abruptly announced her retirement in tweets, a decision she described as "stupid" and "really foolish."

Without her acting career, Amanda said she "had no purpose in life" and started spending all her time being stoned.

"I got really into my drug usage and it became a really dark, sad world for me," she said, adding that most of her days were spent "at home, getting high, watching TV and tweeting."

Amanda's Twitter account was a constant source of fodder for news sites and tabloids, which devoured her outlandish rants: She called the Obamas "ugly," for example, and falsely accused her father of "verbal and physical abuse," which she later recanted.

"I'm really ashamed and embarrassed with the things I said," she told Paper. "I can't turn back time but if I could, I would. And I'm so sorry to whoever I hurt and whoever I lied about because it truly eats away at me. It makes me feel so horrible and sick to my stomach and sad."

She added that everything she had spent her life working on, she "ruined" through Twitter.

At around the same time, Amanda was also repeatedly in trouble with the law - getting arrested for a number of offenses including driving under the influence, throwing drug paraphernalia out of her Manhattan apartment window and allegedly setting a driveway on fire. Additionally, in classic celebrity meltdown fashion, she drastically altered her appearance, shaving half her head and piercing her cheeks.

Her turbulent behavior led many to speculate whether she was suffering from mental illness, claims that she and people close to her vehemently denied.

"It definitely isn't fun when people diagnose you with what they think you are," Bynes told Paper, blaming her behavior solely on drugs. "I know that my behavior was so strange that people were just trying to grasp at straws for what was wrong."

Now sober, Bynes said she does not miss experimenting with substances.

"I really feel ashamed of how those substances made me act," she said. "When I was off of them, I was completely back to normal and immediately realized what I had done - it was like an alien had literally invaded my body. That is such a strange feeling."

The actress gave advice to others who may be struggling with substance abuse, warning that "drugs can really take a hold of your life."

"Be really, really careful because you could lose it all and ruin your entire life like I did," she said.

This month, Amanda Bynes will receive her Associate of Art degree in merchandise product development from the Fashion Institute of Design And Merchandising in Los Angeles and has plans for a bachelor's degree, Paper reported. While she has dreams of designing her own clothing line, Bynes said her first priority is getting back into acting. The actress expressed the same interest in 2017 during an interview - her first time speaking publicly in four years - with Hollyscoop, an entertainment news show.

Amanda told Paper she wants to return to acting "with excitement and hope for the best," adding that she wants to "try it all."

On social media, news of her comeback was met with an outpouring of support. By early Tuesday, the interview had become a trending moment on Twitter.

"Thank you for so bravely sharing your story with everyone," one Twitter user wrote. "You were always a kind soul and I'm so glad you're bouncing back better than ever."

In light of the interview, many also criticized how Amanda had been treated by the media during her meltdown.

"Never forget that the public totally mocked Amanda Bynes's very real mental health struggles instead of trying to help her but I'm very happy that she's back and doing well," one Twitter user wrote.

Another person tweeted that "the spectacle that her breakdown was turned into was vile and cruel."