Twinkle Khanna Has "Stars In Her Eyes" (And Shirt) Because... 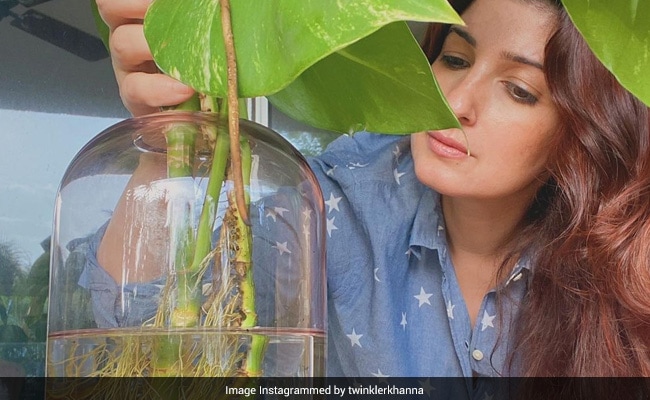 Twinkle Khanna is a woman of many talents. After a short acting stint, Twinkle switched to interior designing and soon followed it up with a successful career as an author. But the bestselling writer is also an avid lover of gardening and has been vocal about her fondness for plants. In various social media posts, Twinkle has given us glimpses of the plants that she nurtures in her home. Now, the actress has shared a post on what spending time with plants means to her. Sharing an image of her working on a plant, Twinkle wrote, "There are stars (in) my eyes and not just on my shirt when I potter around with my plants." One look at them and we were convinced that her love for plants was supported by a blessed green thumb. Fans also seemed to agree with this and left several positive comments below the post.

Twinkle is often seen enjoying a cup of tea or reading a book amidst the lush greenery that the plants provide. A few months ago, the author, who is a fan of mangoes, shared a pic of her daughter, Nitara, tugging at the fruit in the garden. "A childhood wrapped up in mangoes. From the fresh Kairi sliced and sprinkled with salt and chilli to the abundance of its wondrous, tangy yellow pulp. A memory of tart flavours followed by a gulp of water, the aftertaste as fresh as spring water. A decade underlined by the arrival of wooden crates filled with Dasheri, Chausa and Langra," the caption read.

Sending us all on a nostalgia trip, she added, "I wonder if there was a yellow stain on the corners of the mouth that lasted from April to June?"

The doting mother also added that Nitara's love for mangoes reminded her of her own love for the summers gone by. Twinkle wrote, "Looking at her hands reaching out, grasping sunshine and sugar captured in paisley patterns, I relive all my past summers."

Twinkle had also shared a video of her celebrating Holi the green way -- a game of Tic-tac-toe in the garden with twigs and flowers. "The moves may or may not be ‘spectacular', but in time to come I have a feeling this will be a spectacular moment hanging up on the museum walls of our memories," she wrote in the post.

In one of her uploads, Twinkle gave us a peek into the furry and winged visitors that frequented her garden. She wrote, "This morning on the oddly growing champa tree, there is another pair of birds. My world these days is filled with all sorts of creatures. A rat brushed its furry body over my bare leg, we had a snake making its way through the garden, two bright yellow butterflies flew into my bedroom. All these creatures were always around, I was the one who was too busy to see them."

Twinkle is the daughter of veteran actors Rajesh Khanna and Dimple Kapadia. She is married to actor Akshay Kumar and the couple has two children, Aarav and Nitara. She is best known for her books  Pyjamas Are Forgiving, The Legend Of Lakshmi Prasad and Mrs Funnybones.