The Tashkent Files Movie Review: In A Word, Junk 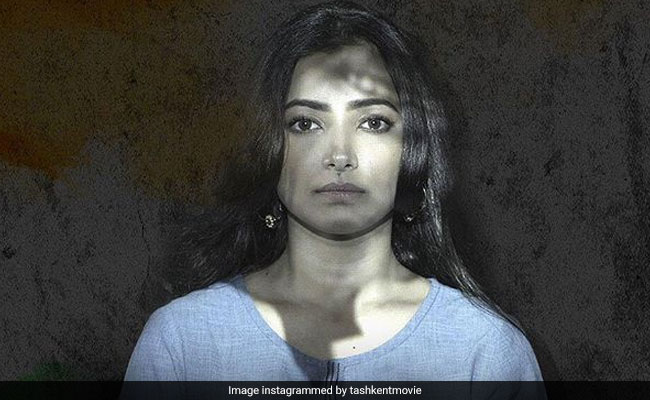 No two ways about it: The Tashkent Files is Google search filmmaking at its worst. Banking upon crowd-sourced research, it peddles untruths and half-truths culled from unverified quarters and seeks to pass itself off as a great, gutsy piece of investigative cinema. The unabashedly partisan film does a great deal of hectoring and hollering for nearly two and a half hours but to no real avail. In the end, it places the only card that it is genuinely interested in on the table - its love for a 'strong' leader who can inflict military defeat on Pakistan. You don't have to be a genius to figure out the 'philosophy' The Tashkent Files is driving at.

On paper, the film takes upon itself the onus of cracking the 'mystery' of the death of Lal Bahadur Shastri, India's second Prime Minister, in Tashkent in early 1966. All it manages to put together is a painfully overlong, abysmally ham-fisted filmed political pamphlet ruing the supposedly ruinous path that India took in the post-Shastri years.

It makes much of the addition of 'socialist' to the preamble of the Constitution during the Emergency, but steers clear of 'secular' (at least in the context of the statute) although the word was prefixed to 'sovereign republic of India' via the same contentious 42nd Amendment.

One character in the film admits (with striking honesty, one must say) that "truth is a luxury". It certainly is in The Tashkent Files. Its crudely fictionalized world gives factual accuracy a wide berth but seeks legitimacy by incorporating recorded submissions by real-life figures - Shastri's political heirs Sunil and Anil, the late editor and Shastri's press secretary Kuldip Nayar and journalist Anuj Dhar. But no matter what it does, it is unable to conceal its blinkered, tendentious approach to history.

Although Indira Gandhi isn't mentioned by name - one suspects the censors have had a role to play here - she is ever-present by implication. It is abundantly clear that The Tashkent Files is interested more in slandering Shastri's successor than getting to the bottom of the truth about the death of a Prime Minister. The latter is only a pretext to beat dead horses. The result of the exercise sucks.

The Tashkent Files presses a panoply of gloriously hamming actors and tidbits of selective, half-baked information (most of which appears to have emanated from the social media cell of a particular political party) into the service of a laughable raking up of an old debate in an attempt to appropriate the legacy of one India's finest Prime Ministers for an obvious ulterior purpose. It trots out a string of generalizations about India and its place in the world, going to the extent of declaring that globalization is another name for corporate slavery. At times, the film doesn't know if it is on the left or the right: confusion reigns supreme!

If nothing else, this load of unmitigated bilge allows the audience to play a guessing game: who is worse - Vivek Agnihotri the cavalier conspiracy theorist or Vivek Agnihotri the kite-flying filmmaker? They run each other close - one inches ahead of the other at different points in the film. The point that both are trying to make is that in the untimely death of Lal Bahadur Shastri India lost a strong 'nationalist' leader who had led the nation to victory in the 1965 war against Pakistan. It harps upon war, citizens' rights and transparency all in the same breath. Not so baffling, given its intention to talk up muscular majoritarianism while falling back on democratic principles as a convenient fig leaf.

The Tashkent Files, is "dedicated to all honest journalists" (is there any upright journo in this country who needs a certificate from a Bollywood filmmaker?), but will have us believe that "journalism politics ka doosra naam hai (journalism is another name for politics)".

It bandies about words like nationalism, secularism, globalization, corporate slavery and terrorism and makes inchoate noises about them principally through the voice of a young "truth-seeker" Raagini Phule (Shweta Basu Prasad), a Pune girl who works for a Delhi newspaper, but also in the form of the pronouncements and fulminations of a bunch of people who are crammed into a room to serve on a committee set up to delve into unanswered questions on Shastri's demise.

The 12 Angry Men-style inquest is aimed at propagating the theory that the Congress leader was eliminated by inimical forces out to - and allowed to - overrun India. Ahead of the end credits, the film runs through portions of the 'claims' of KGB archivist Vasili Mitrokhin about the Russian spy agency's widespread influence in India in the 1970s, but then admits in small print that all these are unproven claims. Wow, what scruples!

Just one example will suffice to sum up the quality of research that has gone into the making of The Tashkent Files. Nobody in the film's writing team knows that the word for a Russian country house/bungalow/cottage is dacha, not dhacha (which in Hindi would denote structure). Not only is the word misspelt on a blackboard during the committee's proceedings, it is also mispronounced a number of times. Nitpicking? May be, but a film that is out to sell us a lemon in the name of serving the cause of truth is asking for it.

The actors do complete justice to shrill and sloppy The Tashkent Files - each one of them froths in the mouth in venting their anger at the injustice done to Shastri's memory even as they go for each other's jugular in ramming their beliefs down unwilling throats. It is not that the film makes do with actors of unproven mettle.

The cast includes Mithun Chakraborty (an Opposition leader looking for a mudda as he gears up for another election), Naseeruddin Shah (a veshti-wearing manipulative South Indian politician who does not want the truth to come out), Pankaj Tripathi (a vituperative committee member who in one sequence raves and rants against secularism) and Rajesh Sharma (another worthy on the panel given to dangerously fanciful conclusions).

The committee has two women other than the journalist who is, in the pre-climactic stage of the film, thrown out of the august assemblage because she goes and meets an informer on the sly - historian Aisha Ali Shah (Pallavi Joshi) and social activist Indira Joseph Roy (Mandira Bedi). They can't stand the sight of each other. It isn't too difficult to see why.

In one sequence, Prakash Belawadi, who plays a secret service man drafted into the probe committee to provide expert insights, hits out at another member's suggestion that India is in danger of being taken over by an army of terrorists (terrorist equals Muslim, in keeping with the worldview that this film subscribes to). He inadvertently echoes how this critic feels about The Tashkent Files: Maine ek saath itni gandagi pehle kabhi nahi dekhi (I've never seen so much garbage in one place). Well, the actors may not be trash, but their performances scrape the bottom of the barrel. And the film? If you still haven't got it, it is JUNK.