Abu Jani Sandeep Khosla described the lehenga worn by Madhuri Dixit as 'a marvel of mirrors.' 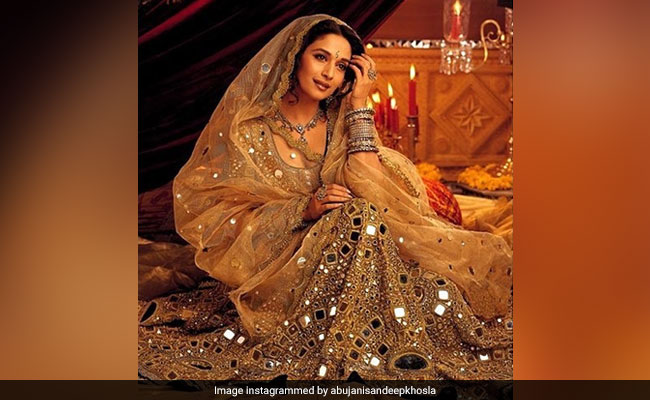 Designer duo Abu Jani and Sandeep Khosla are chronicling their 33-year-old journey in the fashion world, which frequently crossed paths with Bollywood fashion, on social media. After sharing the details of Shweta Bachchan Nanda's wedding wardrobe in a now viral a series, they've picked a lehenga designed for actress Madhuri Dixit's character Chandramukhi in Sanjay Leela Bhansali's Devdas, which released in 2002. They've described this particular lehenga as 'a marvel of mirrors.' In the post, Abu Jani and Sandeep Khosla said that a team of skilled artisans took two months to put together this 10 panel real mirror work lehenga. The mirrors of various sizes were embedded in the fabric with Zardozi embroidery and the final piece weighed 10 kilos.

"Abu Sandeep visualised Chandramukhi as Meera - a devotee of Lord Krishna. They saw her similarly devoted to Devdas and used colours, fabrics and accessorisation to express the subtleties of the enthralling but unfulfilled courtesan," an excerpt from the post read. The same ghagra also travelled to the Victoria & Albert Museum in London, where it was a part of the 'The Fabric of India' exhibit held in 2015.

Now, take a look at the breath-taking lehenga, which Madhuri Dixit wore in Devdas.

Devdas was the highest-grossing Bollywood film of 2002.