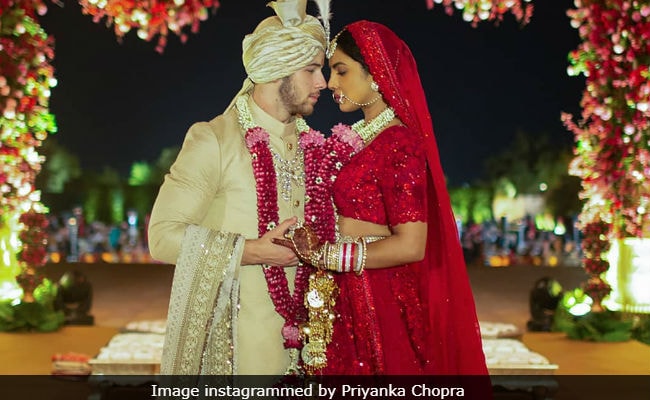 A photo of Priyanka Chopra and Nick Jonas from their wedding in Jodhpur. (Image courtesy: Instagram)

Are you in love with Priyanka Chopra's tonal red Sabyasachi lehenga, which she wore during her wedding to Nick Jonas? Then, the designer has a surprise in store for you. Sabyasachi Mukherjee shared a video on Instagram, showing how the customised red lehenga was made. Priyanka's lehenga had detailed thread-work embroidery, which was accentuated with delicate Siam-red crystals. In the video, we also get a glimpse of how Nick's name (Nicholas, written in Hindi) was made a part of the embroidery. In a previous post, Sabyasachi said that 110 embroiderers from Kolkata took 3,720 hours to create the gorgeous outfit. Sabyasachi also shared how meticulously his team of jewellers made Priyanka's necklace from uncut diamonds, emeralds and Japanese cultured pearls. We also learnt from the video that Sabyasachi's team also designed Priyanka's mangalsutra.

A post shared by Sabyasachi Mukherjee (@sabyasachiofficial) on Dec 6, 2018 at 4:48am PST

"While some bride stay rooted in purist tradition, others aspire to re-interpret it to suit their personalities... Priyanka Chopra's neo-traditional bridal lehenga was the result of an active collaboration between the designer and the bride. The Kanauj Rose lehenga remains a Sabyasachi house classic for women who like to marry global tradition with Indian heritage," Sabyasachi said in a statement posted on his Instagram page.

A post shared by Sabyasachi Mukherjee (@sabyasachiofficial) on Dec 6, 2018 at 4:47am PST

Sabyasachi also said that a tonal red bridal lehenga was first a part of his 2012 couture collection "New Moon" and three years later it was later updated for a couture show with Christian Louboutin.

Priyanka Chopra married singer Nick Jonas in a Christian ceremony in Jodhpur on December1, which was followed by a wedding as per Hindu rituals on December 2. The couple hosted a reception in New Delhi on December 4 and they are reportedly planning another reception in Mumbai later this month.