The Brangelina Split Has Been Blamed on Marion Cotillard. She Reacts 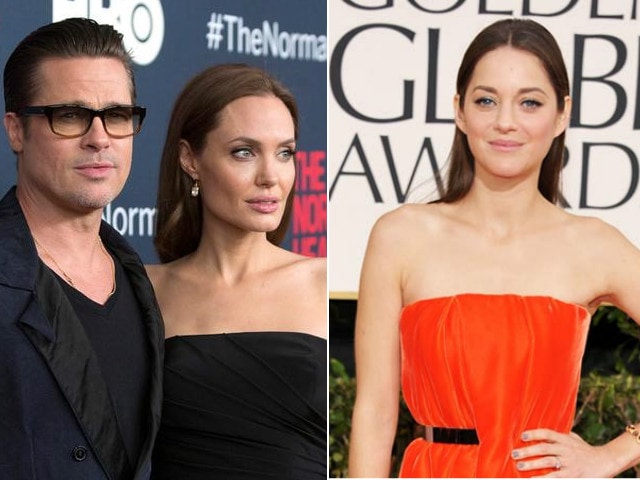 New Delhi: Another Hollywood marriage ended this week when Angelina Jolie filed for divorce from Brad Pitt, her husband of two years and partner of 12. The divorce application cites 'irreconciliable differences' and while sources have told the press that Angelina and Brad disagreed over parenting their six children, the grapevine thinks it knows just why filmdom's most celebrated couple have split. Gossip has suggested that Angelina ended the marriage because Brad cheated on her with his Allied co-star Marion Cotillard.

The alleged affair has been made more complicated because the French actress, 40, revealed to Closer magazine that she is pregnant for the second time. Marion, who won an Oscar for her work in La Vie En Rose, already has a child with her partner Guillaume Canet, a French actor-director she has been with since 2007, but the tabloid press has gleefully suggested that Brad, 52, could be the father.

On Thursday, Marion confirmed in a lengthy Instagram post that Guillaume is the baby daddy, that they are still together and that she wishes Brad and Angelina 'peace.'

This is going to be my first and only reaction to the whirlwind news that broke 24 hours ago and that I was swept up into. I am not used to commenting on things like this nor taking them seriously but as this situation is spiraling and affecting people I love, I have to speak up. Firstly, many years ago, I met the man of my life, father of our son and of the baby we are expecting. He is my love, my best friend, the only one that I need. Secondly to those who have indicated that I am devastated, I am very well thank you. This crafted conversation isn't distressing. And to all the media and the haters who are quick to pass judgment, I sincerely wish you a swift recovery. Finally, I do very much wish that Angelina and Brad, both whom I deeply respect, will find peace in this very tumultuous moment. With all my love Marion Ceci sera la premiere et seule réaction que j'aurai concernant la déferlante inoue qui commencé il y a de a 24 heures et laquelle je suis melée malgré moi. Je n'ai pas pour habitude de commenter ni de prendre au sérieux le tas d'absurdités déversées a le mon sujet mais la situation prenant une telle tournure et affectant des gens que j'aime, je me dois de m'exprimer. Pour commencer, j'ai rencontré il y a quelques années l'homme de ma vie , le pere de notre fils et du bébé que nous attendons aujourd'hui. Il est mon amour, mon meilleur ami et le seul homme dont j'ai besoin. Ensuite, ceux qui me prétendent dévastée, je vais tres bien merci. Ce genre d'inventions aberrantes ne m'affectent en aucun cas. Et pour finir, a la "presse", tous les haters, trolls et consorts qui ont le jugement si rapide je vous souhaite sincearement... un prompt rétablissement. Ceci dit et un peu plus sérieusement, je souhaite Angelina et Brad, deux personnes pour qui j'ai un profond respect, de trouver la paix dans ce moment tumultueux. Avec tout mon amour. Marion

According to a report in aceshowbiz.com, Angelina was very uncomfortable with Brad filming intimate scenes with Marion. "Angie couldn't handle Brad's sex scenes with Marion. Her jealousy was out of control. Brad tried for months to reassure her and calm her anxiety, but it simply didn't work. She said her intuition was telling her he was cheating," a source revealed.

The source was also quoted as saying: "Angie has struggled with insecurity over Brad's fidelity for years, but she was never as jealous over a co-star as she was with Marion. She was always paranoid Brad would do to her the same thing he did to Jennifer (Aniston)."

Angelina insisted then that Brad and she were just "good friends" on the sets of Mr & Mrs Smith but in 2006, she told People that "she couldn't wait to get to work every day" - a remark that Jennifer later described as "uncool."

Jennifer Aniston, who is now married to actor-writer Justin Theroux, is believed to have described the Brangelina divorce as 'karma' to a friend.

Angelina Jolie, 41, and Brad Pitt have three adopted and three biological children, who use the last name Jolie-Pitt. The divorce application reveals that Angelina is seeking custody of the children with visiting rights for Brad. Rumour has it that she believes Brad's partying lifestyle is a bad influence on the children.

Promoted
Listen to the latest songs, only on JioSaavn.com
The actress' attorney said in a statement: "This decision was made for the health of the family. She will not be commenting at this time, and asks that the family be given their privacy during this difficult time."

Angelina is currently working on a film about the Cambodian genocide. Brad has World War Z 2 coming up.