"Excited to be a part of the world of The Big Bull," wrote Ileana while sharing the new poster of the film 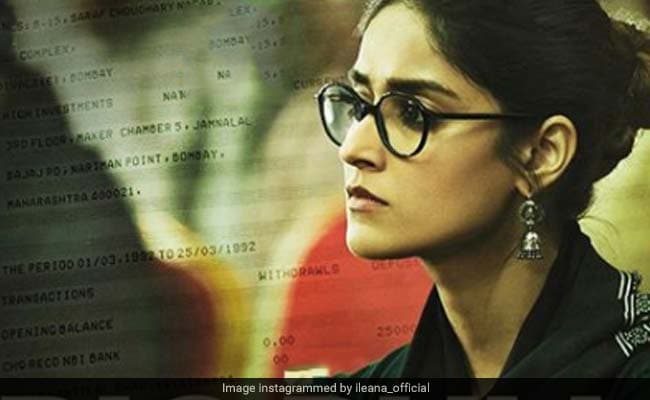 Ileana D'Cruz on a promotional poster of The Big Bull. (Image courtesy: ileana_official )

Actress Ileana D'Cruz dropped her first look from her upcoming film The Big Bull on social media on Tuesday and immediately sent the Internet into a tizzy. The actress will star alongside Abhishek Bachchan in the film. In the new poster of The Big Bull, Ileana's intense look says it all. She can be seen sporting a top, a stole and a pair of glasses with her hair neatly tied in a bun. Sharing her first look from the film, Ileana expressed her excitement like this: "Excited to be a part of the world of The Big Bull: The Man Who Sold Dreams To India.The Big Bull, a crime drama that shook the financial fabric of the country, will unveil soon on Disney+Hotstar." Abhishek's character in the film is reportedly based on that of stock-broker Harshad Mehta, who was charged for numerous financial crimes during the securities scams of 1992.

Take a look at Ileana D'Cruz's first look from the film:

The Big Bull will also star Nikita Dutta, Sumit Vats, Ram Kapoor, Sohum Shah and Lekha Prajapati in pivotal roles. In January this year, Abhishek Bachchan unveiled the first look of the film and defined his character as "the man who sold dreams to India."

Later in February, he shared a new poster and gave another glimpse of his character. Check it out here:

Directed by Kookie Gulati and produced by Ajay Devgn, The Big Bull was earlier slated to release on October 23rd this year. However, due to the coronavirus crisis, the makers decided to premiere it on Disney+Hotstar. The new release date has not been announced yet.

What Taapsee Pannu Wrote About Her Post-Vacation Skin