The Accidental Prime Minister: You Can't Miss Aahana Kumra, Arjun Mathur's Uncanny Resemblance To The Real-Life Characters In This Pic 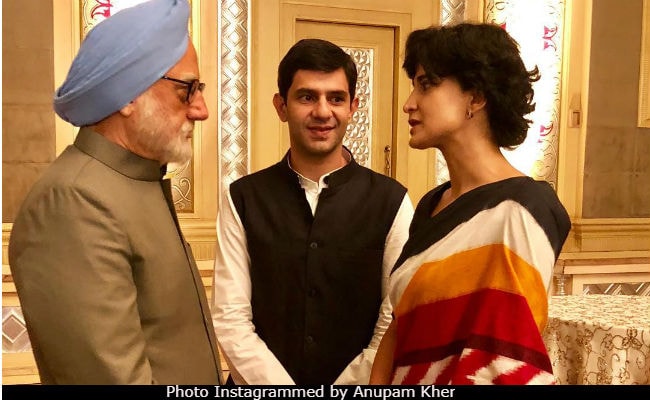 A still from the film The Accidental Prime Minister (Courtesy XYZ)

New Delhi: Anupam Kher, who plays former Indian Prime Minister Manmohan Singh in the upcoming film The Accidental Prime Minister, recently shared a photo from the sets and introduced Arjun Mathur and Aahana Kumra. Anupam Kher also mentioned on his social media post that the former will be portraying the character of Rahul Gandhi and the latter will be seen playing Priyanka Gandhi in the film. "Introducing Arjun Mathur as Rahul Gandhi and Aahana Kumra as Priyanka Gandhi," the actor wrote. In the photo, the veteran actor appears to be in a conversation with Aahana (Priyanka Gandhi) while Arjun, who plays the role of the current Chief of Congress, just looks on. Undoubtedly, the characters revealed so far hold an uncanny resemblance to their real-life counterparts and the recent poster featuring Aahana and Arjun is no exception.

Introducing the very talented @divyasethshah. She portrays the character of Mrs. Gursharan Kaur, wife of honourable ex-Prime Minister of India #DoctorManmohanSinghJi in the movie #TheAccidentalPrimeMinister. @tapmofficial

Here's a sneak peek of the character, who will be playing former Prime Minister PV Narasimha Rao in the film. Take a look at the photo here:

Happy to share my first look of #DrManmohanSingh, India's Former Prime Minister from the movie #TheAccidentalPrimeMinister directed by #VijayRatnakarGutte & produced by #BohraBrothers. Creative producer is @mehtahansal. Film is based on #SanjayBaru's book with the same title. #FilmReleasing21StDec

While the team of The Accidental Prime Minister were shooting for their London schedule, a video of Anupam Kher walking just like Manmohan Singh on the sets went crazy viral. "I was amused that this clip was sent to me by various people. Obviously someone captured it and posted it while I was rehearsing. It is from our shoot of The Accidental Prime Minister in Skipton, UK. So instead of you finding it on various platforms I am happy to share it with you all myself," the actor wrote on his Instagram post.

I was amused that this clip was sent to me by various people. Obviously someone captured it & posted it while I was rehearsing. It is from our shoot of #TheAccidentalPrimeMinister in Skipton, UK. So instead of you finding it on various platforms I am happy to share it with you all myself. #AnActorPrepares #PowerOfSocialMedia

Directed by Vijay Ratnakar Gutte, The Accidental Prime Minister will release on December 21 this year.