"If I portray the only negative side of the protagonist, then it will not run at the box office," said Nawazuddin Siddiqui 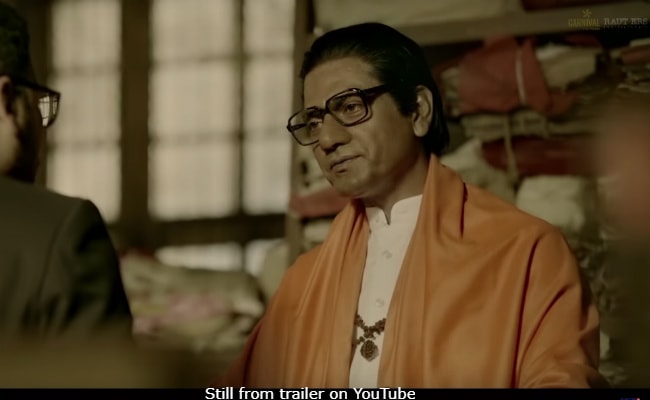 Nawazuddin Siddiqui in a still from Thackeray (courtesy YouTube)

Actor Nawazuddin Siddiqui has been praised for his portrayal of Bal Thackeray in Thackeray but the movie, based on late Shiv Sena supremo who had a controversial political career, has been slammed by some critics for being biased. The critically acclaimed actor says Indian audiences do not like to see the protagonist in shades of grey and that if only the negative side of the protagonist is reflected on the big screen, this will severely impact the box office.

Addressing the critical reviews of the film, Nawazuddin told IANS in a telephonic interview: "For the past 40-50 years, we have been continuously presenting our heroes in a good light. The audience does not like to see the protagonist with grey shades. If I portray the only negative side of the protagonist, then it will not run at the box office."

"Our society is not ready to see the negative traits in the heroes. My previous films Manto and Raman Raghav 2.0 did not perform well. I tried my best to present the characters in those films without any polishing, but with lukewarm responses... I realised that our audience is not ready to see our heroes with negative characteristics."

Keeping aside the critical reviews of Thackeray, Nawazuddin is "overwhelmed" to get his first biggest opening movie to date as a solo lead. The film registered over Rs 6 crore on Day 1 of its release (January 25).

"I am overwhelmed with the responses and love which I am receiving from people. I am thankful to all of them. With 'Thackeray', I got my first biggest opening as the solo lead role. I am honoured and blessed that I got an opportunity to play Balasahebji on screen."

But the 44-year-old also said he does not like "giving much attention to box office collections".

"Honestly speaking, I don't pay much heed to a film's collection and numbers. But it is a weird place, many people judge films on the basis of the collection, no matter what the content is."

"So many films have been made in our industry in which actors have performed well, but the film did not do well in terms of collections... and then they got declared as flops. And there are also so many films in which actors didn't perform well but the film turned out to be the biggest hit just because it collected a good amount at the box office... weird. So, in such scenarios I also can't totally overlook the box office collection of the films."

Talking about the film's success, Nawazuddin said that Thackeray has motivated him to keep doing "challenging roles" in future projects.

"It feels good that when your work is appreciated and now Thackeray is doing so well, it is inspiring me to keep pushing my limits and do more challenging roles on screen."

(Except for the headline, this story has not been edited by NDTV staff and is published from a syndicated feed.)
Comments
nawazuddin siddiquithackeray