Tandav Trailer: Samar Pratap Singh (Saif Ali Khan) will do anything to become the Prime Minister after his father Devki Nandan's death 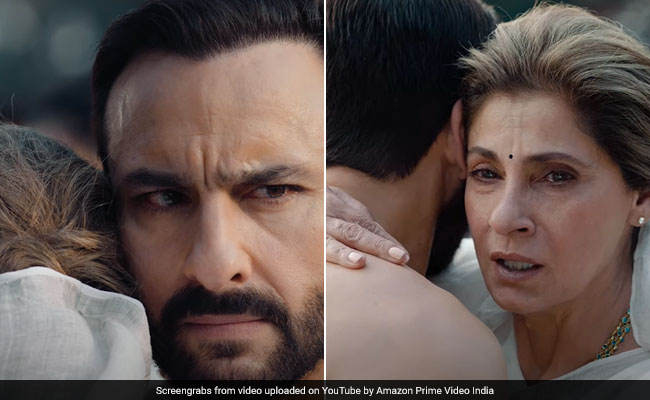 Tandav Trailer: A still from the series. (Image courtesy: YouTube)

The trailer of Saif Ali Khan and Dimple Kapadia's new series Tandav dropped on the Internet on Monday and it is intense, as well as thrilling. The political drama, directed by Ali Abbas Zafar, has an ensemble cast, including Tigmanshu Dhulia, Kumud Mishra, Mohammed Zeeshan Ayyub, Sunil Grover, Gauahar Khan, Amyra Dastur, Kritika Kamra, Sarah Jane Dias and Sandhya Mridul, Anup Soni and Dino Morea. The trailer just shows us a glimpse of power-hungry Saif Ali Khan and Dimple Kapadia's face-off that we will witness in the series, which will premiere on Prime Video on January 15. The story revolves around Samar Pratap Singh (Saif Ali Khan), who will do anything in his power to become the Prime Minister after his father Devki Nandan's (played by Tigmanshu Dhulia) death.

However, he gets tough competition from his mother Anuradha (Dimple Kapadia). The trailer starts Prime Minister Devki Nandan discussing with his friend (Kumud Mishra) why he feels his son will put an end to democracy if he comes to power and calling his son a "dictator." In the following scenes, Samar Pratap Singh and Anuradha can be seen getting ready for the game of power.

Watch the trailer of Tandav here:

The makers of Tandav released the teaser of the web-series in early December last year. In case you haven't seen that yet, take a look now:

Tandav is a nine-part series directed by Ali Abbas Zafar, marking his digital debut. He is known for helming films like Tiger Zinda Hai, Sultan and Bharat.

Earlier, speaking about his series, Ali Abbas Zafar said in a statement: "As you watch the show, you'll realise that there is no right or wrong, there is no black or white; world of power is about the world of greys. I believe that content must be backed by credible performances and I am fortunate to have such heavy weights in the show. I'm excited that my debut as a creator-director in the digital domain is with Amazon Prime Video which will take this intriguing and gripping story of Tandav to millions across the world," reported news agency PTI.