Taapsee Pannu will be seen in more than one sports drama in the near future. 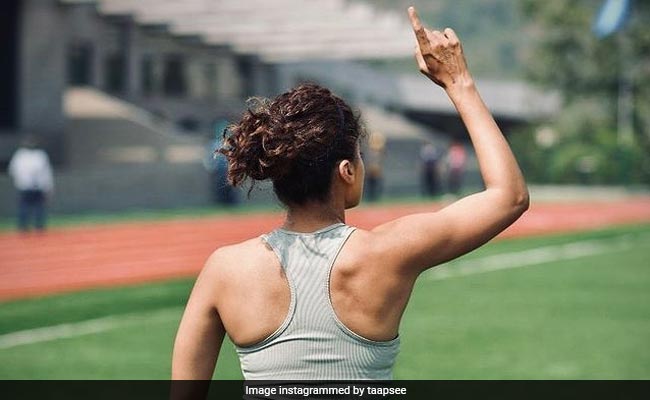 That Taapsee Pannu is an actress with tremendous talent is well-known. The actress has become a household name by slipping into varied roles with the deft and ease of a veteran. After several successful films in the recent past, Taapsee Pannu will be seen in a bunch of sports dramas such as Shabaash Mithu and Rashmi Rocket. Given the nature of the films, it comes as no surprise that Taapsee has to go through gruelling physical transformation for the roles. But the extent of the transformation was revealed only recently on Instagram by Taapsee, herself. The actress shared an image with her back facing the camera on Sunday.

In the image, Taapsee Pannu is seen standing in a stadium with one of her hands raised, flaunting a ripped physique. With the hashtag “the calm before the storm”, the actress hinted at what was to come, in terms of her films. She wrote in Hindi, “Bahut sar pe chada rakha hai ise, kisi ki nahi sunti, par khud ki sunti hai, bahut badi baat hai (She has been overindulged, she does not listen to anyone. But she listens to herself, which is a tremendous feat).” Now, whether this is a dialogue from one of her films or Taapsee's takeaway from her upcoming roles, is up for guess. But, we have to say that the picture and the caption are truly inspiring.

Replying to the most, writer Kanika Dhillon wrote, “Can't wait,” with a heart emoji.

Just a day ago, Taapsee Pannu shared a throwback photo from her school days. In the image, an absolutely adorable Taapsee is seen standing at the number one position holding her prize. She added the hashtags “can't keep calm” and “on your marks”. For the caption, she wrote in Hindi, “Bahut tezz daudthi hai... bachpan se (She always runs fast, since her childhood).”  Reacting to the photo, Taapsee's sister Shagun Pannu said, "And I was in the drill cheering for you".

Recently, she also shared a behind-the-scenes picture from the sets of her film Blurr. She shared the image after the film wrapped. It is also the first film she is producing under her banner, Outsider Films. Along with the image, she wrote, “And it's a WRAP! See you next year at the movies. The first ones are always special.”

Taapsee Pannu made her debut in 2010 with K. Raghavendra Rao's Telugu film Jhummandi Naadam. In 2013, she made her Hindi film debut with David Dhawan's Chashme Baddoor and won rave reviews for her role in the 2016 film Pink.