State Of Siege: Temple Attack Review: Akshaye Khanna is doubtless a talented actor. One sees flashes of his class all through the film. But he is trapped in a script that has little room for vivid character development. 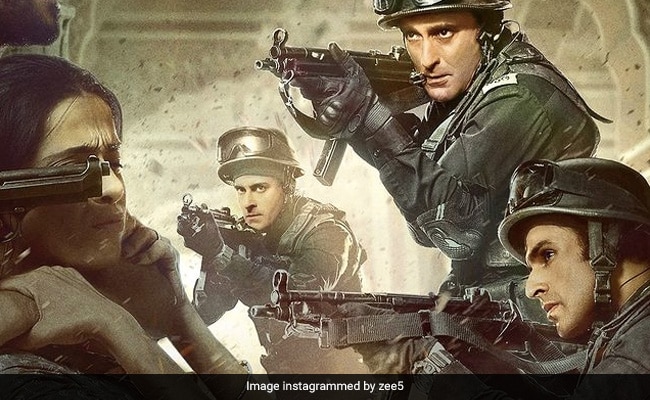 State Of Siege: Temple Attack Review: It has its inevitable share of explosions (courtesy zee5)

A hostage rescue thriller that fictionalizes the September 24, 2002 terror attack on Ahmedabad's Swaminarayan Akshardham Temple in a manner that reeks of staleness, State Of Siege: Temple Attack has its inevitable share of explosions. Yet the Ken Ghosh-directed Zee5 film, a follow-up to a web series (State Of Siege: 26/11), is anything but explosive.

The script by William Borthwick and Simon Fantauzzo is constructed with components that have lost all novelty. Terrorists have for long been a staple of Indian action films. The exploits of intrepid secret agents and unstoppable commandos have fuelled innumerable web shows and movie in recent years. So, when another one comes along and delivers more of the same, all it can do is produce unmitigated tedium.

In State Of Siege: Temple Attack, mayhem is unleashed by four terrorists, double the number of men who were involved in the real-life incident in which 30 people were gunned down. In a long disclaimer, the makers assert what is about to unfold on the screen is wholly fictional. Why then even bother to attempt a purported reenactment of true events?

In terms of the drama that it seeks to whip up around an event that occurred two decades ago, State Of Siege: Temple Attack comes up with little that could be deemed useful in terms of information or insight. Its narrative building blocks, all too familiar, tread safe ground.

A National Security Guards (NSG) officer with a botched mission and the death of a fellow officer on his conscience looks for redemption. Another NSG man is expecting his first child. His wife is in a maternity ward even as the hostage crisis escalates and he is summoned back to the thick of the action.

Two men in uniform - one torn between his desire to make amends for a past failure and the necessity to play by the rules; the other caught between the call of duty and the need to be by his wife's side - are the faces of valour that the film celebrates. Fair enough. But if you expect a great deal of tension and energy to emanate from the inner conflicts of the duo, banish the thought.

To complete the picture, a scowling, bearded terror mastermind - can they ever look any different in a Hindi film? - barks orders to a quartet of trained men on a suicide mission. Neither the leader nor the flock evolve into anything more than stereotypes.

State Of Siege: Temple Attack opens in Kupwara, J&K, in 2001. A minister's daughter has been kidnapped by terrorists. A NSG unit led by Major Hanut Singh (Akshaye Khanna) launches an attack on the hideout. The girl is rescued but an Indian army captain (Akshay Oberoi in a cameo) is felled by a bullet. The Major is blamed for the loss of an officer.

Unsurprisingly, the Gujarat riots of late February are glossed over - a passing mention is made for form's sake - and the film jumps to nine months later. An attack on the Ahmedabad temple is planned even as the state chief minister (Sameer Soni) addresses a conference of industrialists in the banquet hall of a hotel. The NSG is called in to secure the area.

Akshaye Khanna is doubtless a talented actor. One sees flashes of his class all through the film. But he is trapped in a script that has little room for vivid character development. His is a single-note performance despite all the effort that he puts in to bring the underwritten character alive.

He isn't alone. Gautam Rode plays the officer whose wife (Auritra Ghosh) is about to deliver a baby. His emotional turmoil as he leaves his life partner to her own devices is treated as a mere footnote in the story. And the aspect of the plot that the film focusses on initially - Major Hanut Singh's grief and guilt - is quietly jettisoned. It is broached only in the context of the officer's tendency to be a loose cannon.

State Of Siege: Temple Attack is deathly mechanical in the recreation of what really happened on the ground. The terrorists, armed to the teeth, do not look menacing enough to send shivers down our spines. The firing is indiscriminate, the killings are chilling, and the people in the line of fire run for cover in a desperate bid to save themselves. All the action notwithstanding, at no point does the film become an edge-of-the-seat affair.

The brooding man that Khanna plays has to reckon with cynicism both from his boss Colonel M.S. Nagar (Pravin Dabas) and a junior team member Captain Rohit Bagga (Vivek Dahiya, a remnant from last year's eight-episode mini-series).

With the terrorists on a rampage in the temple complex - besides the sanctum sanctorum, it has an exhibition hall, an auditorium and sundry retail outlets, including a mithai shop that occupies a key place in the plot - the NSG commando unit steps in when the intervention of the local police and the Rapid Action Force proves futile.

To counterbalance the Islamophobic spirit of the enterprise, there is a Khan in NSG uniform willing to risk his life to save the innocents under attack. There is more. A Muslim employee of the temple trust, Mohsin (Chandan Roy), contributes his mite by standing up to the terrorists.

"I am a Muslim but I am not like you," he says to one of the murderous marauders (Abhilash Chaudhary). There is more vilification that mitigation in that seemingly well-meaning utterance because all that this moment in the film does is reinforce the good-bad binary. It is the head priest of the temple who has the last word. When the hurly-burly is done, the saffron-clad holy man delivers a full-fledged sermon on the futility of violence.

The visuals of the snow-covered heights of Manali, passed of as sectors in Kashmir, have eye-popping sheen, with supervising cinematographer Richard Henkels and director of photography Tejal Pramod Shetye using the impressive vistas and natural light sources to compose exceptionally impressive shots and sequences.

However, once the action shifts to the temple complex, and specifically to the auditorium where 23 people are held hostage and under the threat of one of them being eliminated every half an hour, the camerawork becomes busier and loses its way a tad in more elementary framing and lighting.

Its 'siege' mentality draws the film toward belligerent posturing and prevents it from being a genuinely dispassionate portrait of the human cost of sectarian conflict. The question is: is it even trying? State Of Siege: Temple Attack buries itself under a heap of tripe tropes. It is monotony that triumphs.