Draped in a pristine white blanket, Srishty Rode has taken the Internet by storm with her pictures. 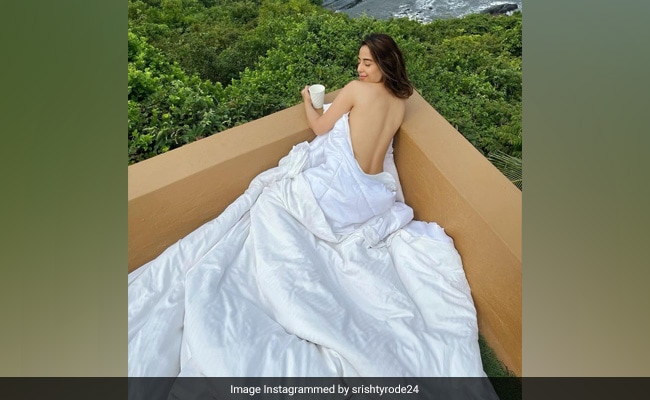 Srishty Rode is one of the most popular stars on Indian television and for good reason. The actress, who has worked in several shows, is loved for her dancing skills and strong social media presence. On Wednesday, she set the Internet on fire once again, with a set of pictures that left fans in awe. In the images, Srishty Rode is seen on the terrace with lush greenery and the sea in the background. She is draped in a pristine white blanket, showing off her back and wearing a smile on her gorgeous face. “Woke up like this,” she wrote in the caption box.

The photos soon grabbed eyeballs on the social media platform, with viewers going gaga over how lovely Srishty Rode is looking. Reacting to the image, actress Simple Kaul said, “Wow.” Referring to the island country that has become the new favourite tourist destination for Indian celebrities, Tanya Sharma said, “Maldives feels in Goa.”

Srishty Rode's love for the beach was evident in another set of pictures that she shared a few days ago. Striking poses on the sand, Srishty Rode wrote, “What do you think is the prettiest the sun, the sky, the water or me?”

Adaa Khan replied to Srishty Rode's question and said, “You.”

The water baby shared another picture of her time in the pool that had fans raving about her style. Sharing the pic, Srishty Rode asked, “Would you be my lifeguard if I was swimming with sharks?”

This time around, too, Vishal Singh inundated the comment section with over 40 fire emojis.

Srishty Rode began her career in 2007 with Kuchh Is Tara. She is known for her work in shows such as Yeh Ishq Haaye, Ishqbaaaz. She also appeared as a contestant on Bigg Boss 12.