Sridevi, Always And Forever. 8 Best Songs Of The Actress

On Sridevi's death anniversary, we look back at some of her memorable songs 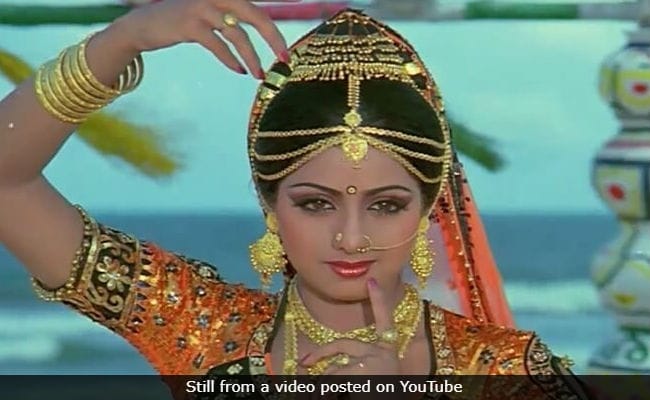 Sridevi in a still from the song Naino Mein Sapna. (Image courtesy: YouTube)

Sridevi will always be in our memories and watching her in films was nothing less than a magic. Considered the first female superstar of Indian cinema, she ruled Bollywood for several years. Sridevi was 54 when she died on February 24, 2018, leaving family, friends and fans reeling in grief. However, the beloved star is alive in our memories with her cinematic presence, elegant performances, iconic songs and timeless style. Sridevi was all of four when she began her acting career as a child artiste. She holds an extensive filmography to her name in a career spanning over five decades.

On her death anniversary, as we remember Sridevi, we look back at some of her memorable songs.

Top of the list, is Hawa Hawai, Mr India

Hawa Hawai is a timeless classic. Sridevi's rocked the song with her expressive eyes and her dance moves. The song was a blockbuster then and it still is. 'Bijli giraane main hoon aayi....,' she says. Years later, in 2017, Vidya Balan recreated Hawa Hawai in Tumhari Sulu.

Dancing against the backdrop of matkas in Naino Mein Sapna, this Sridevi and Jeetendra's Eighties song rocked the chartbusters. Sridevi grooved to the peppy beats in colourful lehengas while Jeetendra danced in his quintessential white boots and matching outfit.

Sridevi played an 'ichhadhaari naagin' in the film and mesmerised the audience with her dance performance in a white lehenga and her eyes said it all.

In Mr India (1987), Sridevi won many hearts, first as the chulbuli reporter Seema, then for the song Hawa Hawai and also scorched the screen in a blue chiffon sari in Kaate Nahin Kat Te.

Sridevi dances to Morni Baga Ma Bole in the sand dunes with perfection and the iconic dance number is still remembered as one of the most significant songs.

Yash Chopra presented Sridevi in Chandni and with her acting skills and dance, the actress made everyone fall in love with her. In the film, Rishi Kapoor falls in love with Sridevi when he saw her dance to Mere Haathon Mein Nau Nau Choodiyan in a pink lehenga with exquisite jewellery and her choodiyan.

Sridevi lit up the screen with her double role in Chaalbaaz and her quirky rain dance - Na Jaane kahan Se Aayi Hai - stole the spotlight too.

In 2012, Sridevi returned to the silver screen with English Vinglish and her impeccable acting skills left many of us speechless, all over again. Though for just a few minutes, but she flaunted her dance moves in Navrai Majhi and it was a pleasure to watch her.

Sridevi was married to filmmaker Boney Kapoor. Actress Janhvi Kapoor and Khushi are their two daughters. Sridevi won a National Award (posthumously) for her last film MOM, which released in 2017.