Squad Review: Designed to showcase Danny Denzongpa's son and Anita Raaj's niece, all that the film manages to do is leave the hopeful duo high and dry because it just doesn't get off the ground. 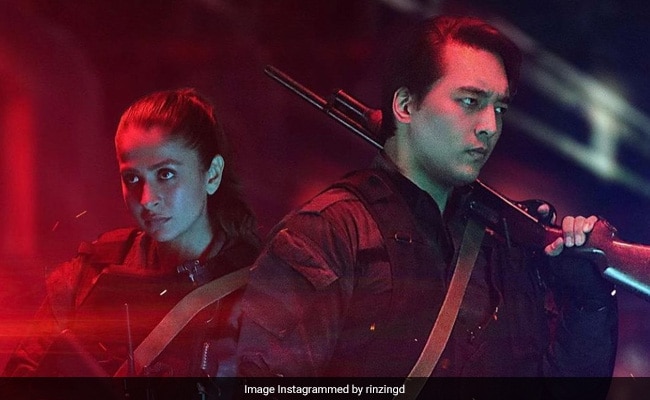 A film that wallows in mediocrity, Squad is a comatose thriller built around action sequences that are as dreary as an empty, decrepit house on the brink of collapsing in a heap. Riddled with inanities, it takes no time at all to cave in and leave behind an unseemly, unmitigated mess. Squad is designed to showcase Rinzing Denzongpa, veteran actor Danny Denzongpa's son, and Malvika Raaj, Anita Raaj's niece. All that the film manages to do is leave the hopeful duo high and dry because it just doesn't get off the ground. It is a non-starter of a launchpad.

Squad, streaming on Zee5, is written, produced and directed by Nilesh Sahay, who also happens to be the film's action director. It is a clear case of one cook handling too many jobs for his own good. The result is a bland broth spoiled beyond repair. The rock-bottom writing is aggravated by storytelling methods that are shockingly obsolete and ham-fisted.

The yarn that Squad peddles is spectacularly silly when it isn't unbelievably incoherent. If it is a marvel that somebody thought it fit to produce this film, what is infinitely more surprising is the fact that makers of Squad roped in Australian stunt coordinator Keir Beck (who has worked on Mad Max: Fury Road and Casino Royale, among other movies).

Squad is about a band of elite Indian soldiers sent to Eastern Europe to rescue the kidnapped daughter of an eminent scientist. The six-year-old girl has gone missing from her home in Adjara, Georgia. The special forces of several countries have their sights on child who, despite being precocious enough to wonder aloud who her real parents are, is oblivious of the reasons why she is at the receiving end of so much attention.

But why on earth is she so sought after? That is the puzzle that Squad promises to crack but it ties itself up in knots in trying to reach a logical conclusion. The last thing that one looks for in a film like Squad is logic, but even the mysteries hidden in its meaningless meanderings yield nothing.

The battle, the head of National Emergency Response Operations (NERO) points out, is not for the nation per se but for "Hindustan ki beti", who has fallen into the wrong hands and needs to be extracted no matter what.

The rescue squad is led by commando Bhim Rana (Denzongpa), a man wracked by guilt because, three years ago, he had failed to save a little girl from being blown up by an explosive device in Pakistan Occupied Kashmir. The soldier has since disappeared from sight and has drowned himself in alcohol.

But Nandini Rajput (Pooja Batra), the NERO chief, tracks Bhim down and after much cajoling convinces him to come out of retirement and lead the mission. She throws the prayaschit (atonement) bait at him. He swallows it. Isn't he a man in need of redemption?

Bhim is joined by Aria (Malvika Raaj), Addy (Tanisha Dhillon) and a reluctant Amit Dixit (Amit Gaur), among others, and they march into battle, each as clueless as the other as to what they are up against. One guy outside their group asks a little earlier in the film: "Magar hum yeh kar kya rahein hai (What are we doing)?" Good question that. The point is that the question stands no chance of being answered because the film itself is trapped in a maze of its own making.

Squad isn't all action. It has a couple of songs. One is picturised in a bar somewhere in Eastern Europe where the heroine shakes a leg to the beat of a desi song. The other is a romantic ditty that interrupts a sequence in which the hero and the heroine are in grave danger and decide to lose themselves in the labyrinths of love.

All the other numbers in Squad are background songs that are a cross between martial music and motivational rap with pronounced religious and mythological overtones, with the Pandavas and Kauravas, Kali and Durga and all that thrown into the bubbling musical cauldron. The songs blare away when the hero and his associates beat the hell out of their adversaries.

Bhim's principal enemies are, however, within the system that he serves. Nandini Rajput has a corrupt bureaucrat Abhay Bhatnagar (Mohan Kapoor) breathing down her neck and putting up obstacles in her way. Bhim, on his part, has to reckon with a soldier under him who is averse to taking orders from him.

Squad, made without a semblance of imagination, leaves nothing to the imagination. It wends its way through a pastiche of arbitrary situations that begin and end without taking the film forward. From the very start, we know who the two bad guys are going to be although, at periodic intervals, masked and armed men surface randomly to have a go at Bhim. That gives the hero a reason to flex his muscles.

Muscles, did we say? No, there are no pectorals or six-packs on display in Squad. Although Rinzing Denzongpa is projected as an "action star" he does not have the trappings of one. The role written for him, or for that matter, for any of the other actors in the cast, is pathetically sketchy. He is hard done by - all he is called upon to do is stare blankly at the camera and go through the motions. He does that with touching fastidiousness.

One can only feel sorry for newbies seeking their fortunes in a film as rank bad as Squad. Coming to think of it, its writer-director is Gambler and Prem Pujari star Zaheeda's son. Like the two lead actors, he has his roots in the Mumbai movie industry. He should have known better.

The actors flounder because the ludicrous and wishy-washy Squad is devoid of cinematic sense and storytelling flair. It is worse than a mere misfire. It is a dead-on-arrival dud.