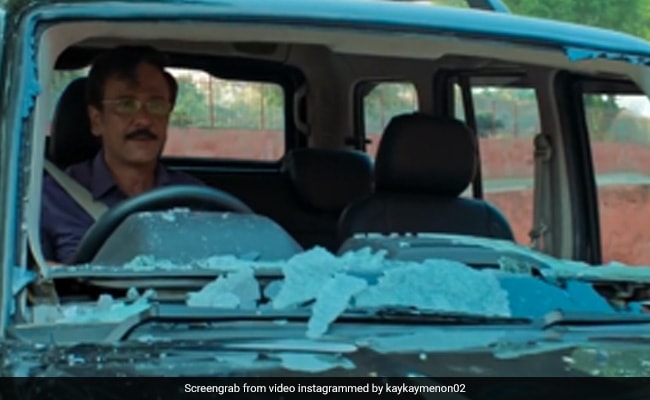 Himmat Singh, unflappable Research & Analysis Wing (RAW) agent who spearheads a global network of intrepid Indian spies, gets full-fledged solo treatment in this strong and steady follow-up to Special OPS, a Hotstar Specials series that landed in our midst a year and a half ago, when the world was a very different place. Special Ops 1.5: The Himmat Story, comprising four episodes that run a total of three hours and a bit, is taut and gripping, if just a touch thin on the edges. With Kay Kay Menon in fine fettle and Vinay Pathak (reprising his Abbas Sheikh role), Aftab Shivdasani (playing a RAW spy and happily married man) and Aadil Khan (as the principal antagonist) delivering solid performances, the show canters along at a nice, even pace.

Special Ops 1.5 has been created and co-written by Neeraj Pandey, who, like he did in the inaugural season, shares directing responsibilities with Shivam Nair. Pandey's espionage genre expertise stands the show in good stead. It has a compact quality that stems from a judicious, restrained blend of thrills, surprises and moments of psychological depth.

The story homes in on the personal and professional encounters that shaped the life and career of the RAW superspy who had put the cat among the pigeons 20 years ago with his theory that one of the terrorists involved in the 2001 Parliament attack had escaped the Delhi police dragnet.

The years immediately following the incident are seen from the point of view of Delhi Police sub-inspector Abbas Sheikh (Vinay Pathak), who is summoned by a two-member interview board (the selfsame one that grilled Himmat Singh himself in Season 1) to throw light on the seasoned secret agent and his exploits, Himmat is a year away from retirement and his superannuation package, Abbas is told, will depend on his testimony.

"Himmat Singh Himmat Singh kaise bana yeh bahut interesting story hai," the police inspector says before he proceeds to piece together Himmat's progress in the period between 2001 and 2003. The Himmat story has it all: police shenanigans, run-ins with shady operators, an unceremonious suspension from service, shock revelations and personal tragedies that leave a scar on him and alter the course of his life.

The story, as Abbas claims, is interesting. It is illuminating too because isn't only about one man. It is about a world on the edge. Strewn across it are girls who are more than just pretty faces, deadly honey traps, intelligence leaks, shadowy spies and traitors, a senior police officer out to derail Himmat's plans, a rogue secret agent bent upon doing pretty much the same, and a journalist-girlfriend desperate to introduce Himmat to her parents.

The lead character clearly has his hands full as his work takes him and/or his mates to Bangladesh, Sri Lanka and Ukraine, where a large chunk of the show's pre-climactic sequences have been shot. These scenes are the high points of the season, with the three key actors - Menon, Shivdasani and Aadil Khan - engaged in a do-or-die clash.

There is more. A hospitalized Indian diplomat in Colombo (Santanu Ghatak) runs into a beautiful medical intern (Aishwarya Sushmita) and his life goes for a toss. Elsewhere, a Navy commodore (Vijay Vikram Singh) falls under the spell of a Russian "sparrow" (Maria Ryaboshapka) and finds himself hopelessly pushed to the wall.

Early in the show, Abbas the raconteur narrates details of a meeting between Himmat and Mahendra Chautala (Harssh Singh), joint commissioner of Delhi Police, in which he himself wasn't present. One of the interviewers (Parmeet Sethi) wants to know whether it was Himmat who shared with him what happened at the meeting. Abbas answers in the negative but is quick to point out that he is in the business of intelligence gathering and is, therefore, privy to information not in the public domain.

The rest of the narration follows the principle that Abbas is a man who knows everything about Himmat and his key operations in the years that the four episodes focus on. This device calls for some willing suspension of disbelief. But since the stories that Abbas narrates are interesting in themselves, questions about their source and the basis of his knowledge are easily relegated to insignificance. One question that is inevitable is: why is the prequel 1.5 and not 2? The brevity of the tale is probably one reason but most likely it is the fact that Himmat's story isn't the entirety of the Special Ops saga that is behind the intriguing numerical suffix.

The Himmat saga is only half of the Special Ops narrative, given that there is a whole team that he works with in the line of duty and that he also has a family that is a pivotal part of his orbit - wife Saroj (Gautami Kapoor) and daughter Pari (Revathi Pillai). Saroj, in fact, has a significant presence in Special Ops 1.5.

The four episodes of this mini-season are, mystifyingly, titled after films directed by lyricist Gulzar - Aandhi, Mere Apne, Lekin and Ijaazat. One is left wondering what the connection between an espionage thriller and Gulzar's intimate, inter-personal dramas could be. Is the preponderance of flashbacks in the poet-filmmaker's oeuvre the reason why the creators of this show about one man's back story have fallen back on his films for inspiration, if only on a surface level?

A crucial part of Special Ops 1.5 seeks to clear the air on several turning points of his life: the creation of his family, an ill-fated romance, his deep bonding with former college mate and fellow secret agent Vijay Kumar (Aftab Shivdasani) and a personal tragedy that shakes the otherwise stoic man to the core.

Equally important in this season of Special Ops are a couple of wayward public figures - an Opposition leader's young, politically ambitious son and a philandering Bangladeshi minister. The former's mom summons Himmat for help, the latter is in his line of fire. It is in the course of the Dhaka operation that the protagonist's path crosses that of Maninder Singh (Aadil Khan).

The two men are on the same side of the war to begin with. Then something snaps and Maninder goes rogue. Thereby hangs another tale and another outing that pushes Himmat Singh to the limits of his tenacity and guiles.

To be deemed a success, all that Special Ops 1.5 had to be was half as decent as its precursor. It is much more. It hits the ground running and works up enough excitement and intrigue to justify its existence.