Sonu Sood's Got Major Fitness "Competition" From His Pint-Sized "Hero"

"Finally I have someone who's going to give me competition in fitness," Sonu Sood captioned his throwback photo 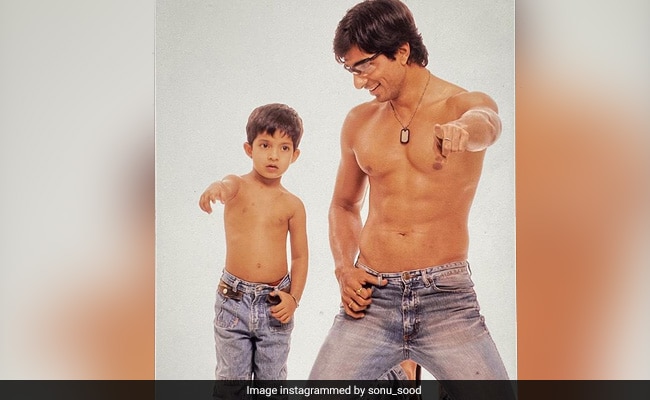 Actor Sonu Sood packed a punch for his birthday wish for son Eshaan. The Dabangg actor made sure that Eshaan's birthday greeting remains a memorable one by taking a trip down memory lane and digging out one of his favourite father-son moments. Sonu Sood shared it on Instagram as a birthday greeting for Eshaan, who must be in his teens now. However, in the throwback photo, Eshaan is a pint-sized fitness enthusiast, who can be seen imitating his dad's pose. Sonu Sood captioned his post this way: "Happy birthday my hero, Eshaan Sood. Finally I have someone who's going to give me competition in fitness."

Here's how Sonu Sood wished his son Eshaan on his birthday:

Happy birthday my hero❤️ @eshaansoood . Finally I have someone who's going to give me competition in fitness 😂

Eshaan indeed grew up to give Sonu Sood major fitness competition. He often trends for his work-out posts and ripped physique. Eshaan is a fitness enthusiast just like his father and here's just a glimpse of their idea of "twinning." Who would have thought?

Meanwhile, Eshaan also joins Sonu Sood's work-out sessions and their "quarantine gym sessions" turn out to be this intense.

Sonu Sood and Eshaan are partners-in-crime in more ways than one. Here, take a look:

In the recent past, Sonu Sood became somewhat of a hero among stranded migrants for his efforts to send them back home. He had even offered his hotel in Mumbai for healthcare professionals to stay in. He is best known for his roles in films such as Paltan, Dabangg, Happy New Year, R... Rajkumar and Simmba.