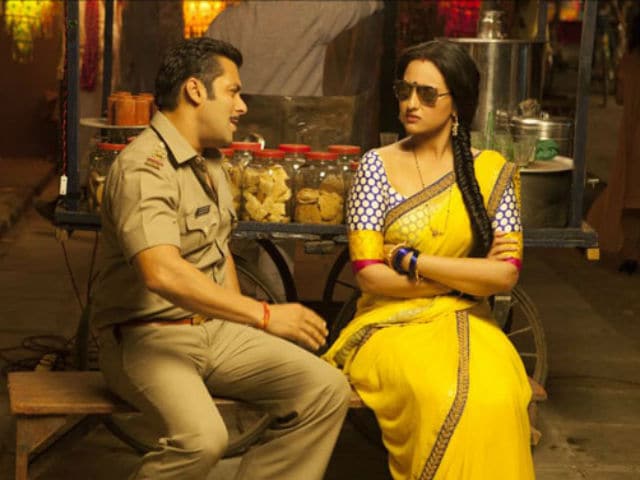 Sonakshi Sinha and Salman Khan in a still from Dabangg

New Delhi: Actress Sonakshi Sinha will soon be seen playing a journalist in Noor. Ahead of the release of Noor, she lined up a couple of questions she would like to ask Salman Khan, her co-star of the Dabangg films and Son of Sardaar, and her father Shatrughan Sinha, reported news agency IANS. If Sonakshi Sinha were a journalist, she would love to enquire about something which "everyone" is curious to know about and from Salman Khan. The 29-year-old actress made an indirect reference to the enquiry if Salman is getting married anytime soon. "To Salman, I would ask the same question everyone is asking him for years," said Sonakshi, reported IANS. Salman is rumoured to be dating Romanian model and actress Iulia Vantur, who is a regular at Salman Khan's family get-togethers.

When asked about playing a journalist to her father, Sonakshi said: "If I had to ask my dad a question, I would ask something to which he won't say 'khamosh'."

Salman Khan's parents - writer Salim Khan and mother Salma Khan - reportedly have their wedding anniversary on November 18, which is also the wedding date of Salman's sister Arpita Khan Sharma, who married Aayush in 2014.

So far, Salman's family members have carefully avoided responding to enquiries about Salman's probable wedding. In May last year Salman's brother Arbaaz was asked if Salman is marrying anytime soon when he said: "You think I'm going to answer that?" Last year, Salman's brother Sohail Khan was also reportedly agitated and allegedly abused a reporter when asked about Salman's marriage. Soon, a disclaimer from Salman partially pacified his fans for a while. "When I want to get married, I will get married. I don't need to tell you when I am getting married. When I am getting married, I will tweet about it. That is something I will keep it to me and my fans," said Salman.

Last year, Iulia was reportedly upset with Salman's apparent refusal to commit but these rumours were put to rest after she was spotted with Salman's family events like Sohail Khan's elder son Nirvaan's birthday party and Salim Khan's birthday celebrations at the Khan residence in November.