Sonakshi Sinha And Anarkali - Both Disco Chali In This Pic 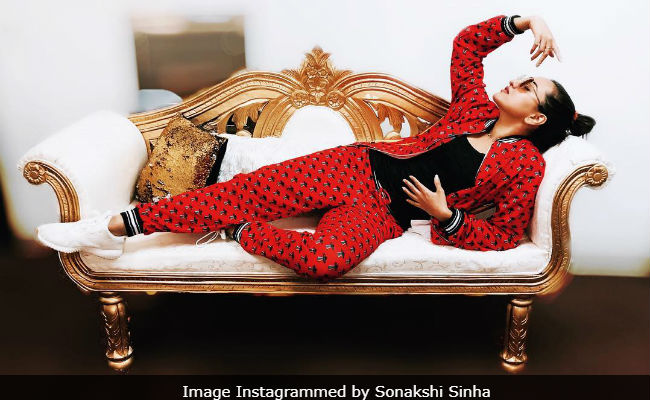 Sonakshi Sinha has a strong posing game and that clearly reflects in her latest Instagram post. Sonakshi, who is currently busy with the shooting for Shilpi Dasgupta's untitled film in Amritsar (going by her Instagram stories), managed to take some time off her busy schedule and added another post to her Instagram entry that sums up her mood. In the picture, a relaxed Sonakshi can be seen dressed in printed red separates and wearing tinted glasses as she sits back as poses on a white couch. We loved the Dabangg actress' quirky style but it wouldn't be wrong to say that the highlight of the post was definitely the caption. Soankshi borrowed a line from Malaika Arora's popular song Anarkali Disco Chali, from the 2012 film Housefull 2 and wrote: "Mood: Anarkali disco chali. The post received over 1 lakh likes on Instagram.

Sonakshi has been actively sharing pictures from the Amritsar schedule of Shilpi Dasgupta's untitled film. The actress posted pictures with the film's director and her co-star Varun Sharma. "A cozy moment in the thannnnd with my lovely director Shilpi Dasgupta," read the caption on Sonakshi's post. She added the hashtags "#shootshennanigans" and "#warmfuzzyfeelings."

Take a look at some more posts here:

Naya din, nayi film... naya kaam... but no naam! First day of shoot today, will tell you the name as soon as we know! Wish us luck directed by @shilpidasgupta, produced by @tseries.official, @mriglamba and #MahaveerJain! #23

Apart from Shilpi Dasgupta's film, Sonakshi will be seen in Abhishek Varman's Kalank, co-starring Alia Bhatt, Varun Dhawan, Madhuri Dixit and Sanjay Dutt. She also has Mission Mangal alongside Akshay Kumar and Vidya Balan in the pipeline. Sonakshi will also be seen in the third installment of the Dabangg series.