Soha Ali Khan walked the ramp with Kunal Kapoor - her co-star of 2006 film Rang De Basanti - in Mumbai and shared a priceless click from the runway. Soha and Kunal Kapoor were showstoppers for designer Vikram Phadnis at yesterday's fashion gala and looked absolutely stunning together. Soha, who added a tongue-in-cheek caption while sharing the photo, wrote: "The long and the short of it!" and took us back to Rang De Basanti days. While Soha was paired opposite R Madhavan in the film, she and Kunal Kapoor were cast as two factions of a group of inseparable friends. In Rang De Basanti, Soha and Kunal co-starred with Aamir Khan, Sharman Joshi, south actor Siddharth, Atul Kulkarni, R Madhavan and Waheeda Rehman.

Here's how Soha packed a 'pun'ch while sharing the photo from last night:

The long and the short of it ! @kunalkkapoor

Soha Ali Khan stole the spotlight in a scarlet lehenga choli from Vikram Phadnis' latest collection while Kunal Kapoor complemented her in a yellow sherwani. 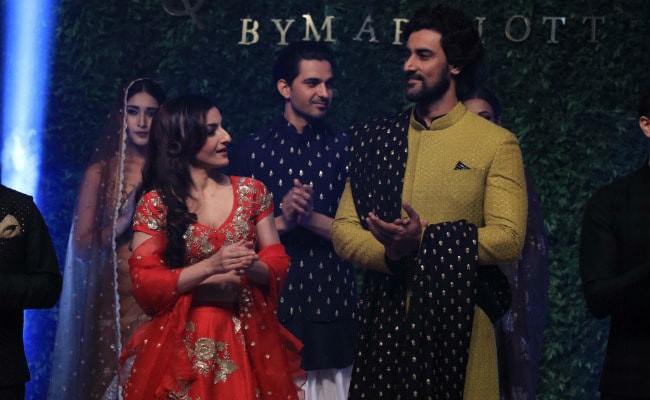 Soha Ali Khan and Kunal Kapoor on the ramp Soha Ali Khan and Kunal Kapoor on the ramp

Directed by Rakeysh Omprakash Mehra, Rang De Basanti was critically acclaimed for the brilliant performances and the treatment of its theme. It also turned out to be a commercial hit. The film beautifully portrayed an ambitious filmmaker's (played by Alice Patten) attempts to retell the story of India's battle for Independence that eventually appeared to be a reflection of the current political scenario of the country. Rang De Basanti won four National Film Awards, including Best Popular Film Providing Wholesome Entertainment.