In the video, Kunal Kemmu can be heard saying "C'mon" to Inaaya, who then joins the early morning dance party 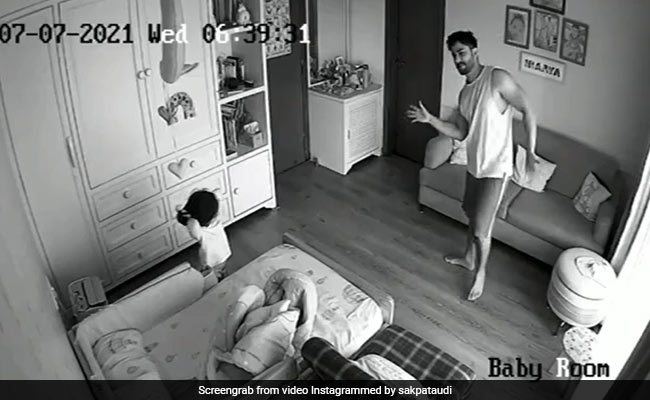 We know one more thing about Kunal Kemmu today - apart from being an amazing dad to Inaaya, he is also quite an enthusiastic early morning dancer. On Wednesday, Soha Ali Khan couldn't resist sharing a snippet of a security camera footage of her home, particularly of Inaaya's room. The video, which is dated to be from last week, is just a glimpse of an early morning routine at Soha Ali Khan's home. What makes the video adorable is that in the footage, Kunal Kemmu can be seen dancing with daughter Inaaya in her room. In the video, Kunal can be heard saying "C'mon" to Inaaya, who then joins the early morning dance party.

"Just another 6:30 am in our home!" Soha Ali Khan captioned her post:

Kunal Kemmu and Inaaya often feature in adorable entries on Soha's Instagram. On Father's Day, Soha posted this cuteness overloaded video of Inaaya getting a head massage from Kunal:

Here's a glimpse of Kunal Kemmu's "stay at home" routine, with daughter Inaaya, of course - painters in the house!

Soha Ali Khan and Kunal Kemmu got married in 2015 and welcomed Inaaya in September 2017. Soha Ali Khan is best known for starring in films such as Dil Maange More, Pyaar Mein Twist, Khoya Khoya Chand, Saheb, Biwi Aur Gangster Returns, Ghayal: Once Again among others. She was last seen in 2018 movie Saheb, Biwi Aur Gangster 3.Kunal Kemmu currently features on the web show Abhay 2 . In films, he was last seen in Lootcase.