Singer Papon Caught On Facebook Live Kissing Minor, What Celebs Have To Say 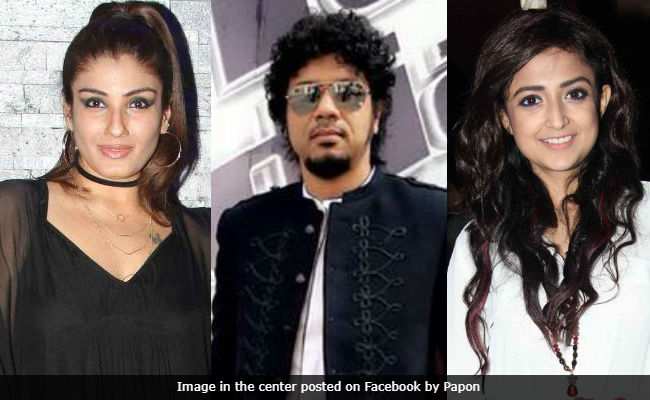 New Delhi: Singer Papon, who was accused of "inappropriately kissing" a contestant in a children's reality show, later apologised but blamed the controversy on "faulty camera angles and accident." However, his colleagues are not accepting his apology or even the explanation he gave in a lengthy statement he shared on Twitter on Friday. Celebrities such as Raveena Tandon, Gauahar Khan and Suchitra Krishnamoorthy among others slammed the 41-year-old singer saying that his beahviour was 'disgusting.' Raveena Tandon, who was last seen in Maatr, tweeted: "This man Papon should be arrested." Filmmaker Farah Khan said that she knew Papon to be a "good person" but the viral video did make her "uncomfortable."

Papon was a mentor to the teenager on TV show Voice India Kids and the objectionable clip was a part of the Holi greetings from Papon's team through a Facebook live session. After Papon's statement, the participant's father also defended the Assamese singer, calling him a "father figure" to his daughter. "What you saw in the video is not intentional. It was just a moment of affection that is being portrayed otherwise," he said.

But Raveena Tandon in her angry outburst on Twitter said, "The girl's parents succumbing to pressure." Here's what she tweeted:

Disgusting! Shameful!Perverse! This man Papon should be arrested ! The girls parents succumbing to pressure ! The explanations given are ridiculous! Haven't felt such anger and shame to see this happen and some on tv debates actually defending the act !

Whatever the situation,accidental,unintentional,affection,love, though it is sad the #papon controversy happened. But will be an eye opener and lesson for all to not getting carried away,and not crossing a line which can be seen as inappropriate.

Unlike Raveena, Farah Khan balanced her words and told news agency PTI: "I know Papon, he is a good guy. But there is no doubt that when I saw that video, it made me uncomfortable. I don't think he meant to do it, but if it was my daughter I wouldn't like it. I think he meant it in the right way, because I know him and he is really a nice guy, but the video did make me very uncomfortable."

Here's what other celebrities said about the controversy:

Wasn't smothering a child's face with your palm rubbing color all over it for 4 secs enough as fatherly love, that u had to pull the child's face then to strategically peck her on the lip??? There was no wrong camera angle or the child moving her face mistakenly BTW #papon

The controversy also gave birth to the hashtag '#IStandWithPapon,' which was used by a section of celebrities such as National Award-winning singer Monali Thakur and Suchitra Pillai to reiterate that Papon had no ulterior intentions.

I got so many calls yesterday for this ridiculous misinterpretation of a man's gesture of affection! I am a girl n I know what is sexual perversion in a man! And Papon is anything but that! Leave aside for a kid! Lotsa love @paponmusic#iStandbyPaponhttps://t.co/UJhX9P8fZH

#IStandByPapon a supremely talented musician whom I have worked with and know well .i will never believe that there was any ugly ulterior purpose to that show of affection from him. So, #istandwithpapon#IStandByPapon

This was Papon's statement after the clip of him smearing Holi colours on the contestant, grabbing her face and kissing her, went viral:

Supreme Court lawyer Runa Bhuyan filed a complaint with the National Commission for Protection of Child Rights (NCPCR) against Papon under the Protection of Children from Sexual Offences Act (POCSO) Act saying that the singer has "committed sexual assault." The NCPCR have issued a notice to both the singer Papon and the channel which airs the show, an official told IANS.

(With inputs from PTI and IANS)
Comments
papon controversyraveena tandonistandbypapon