Simmba New Pics: With Ranveer Singh And Sara Ali Khan, Love Is In The Air 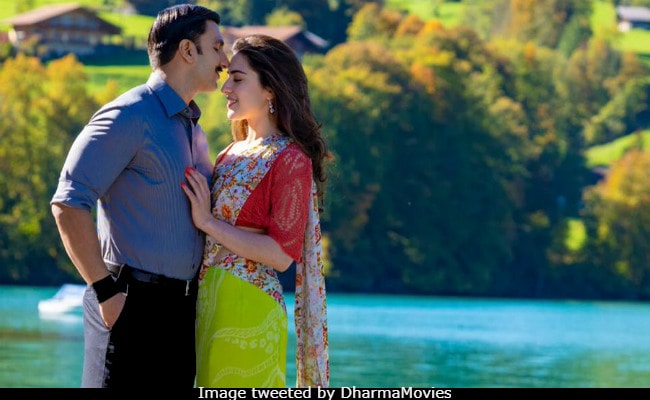 Team Simmba is currently super busy with promotional duties, amidst which, we spotted two brand new photos of the lead cast - Ranveer Singh and Sara Ali Khan. Karan Johar's Dharma Productions, which produces the Rohit Shetty-directed film, shared two new stills, featuring Ranveer and Sara, from what appears to be a new song Tere Bin. The photos arrived on social media as a reminder that a new song with be added to Simmba's playlist on Friday. Tere Bin will be the second song from Simmba to be released after the Aankh Maare redux, which quickly topped charts.

Ranveer Singh and Sara Ali Khan are "coming to colour you in the shades of love" is how Team Simmba described Tere Bin. In the new photos, Ranveer and Sara share loved-up moments at a picturesque location. From the sneak peek, it appears that Tere Bin will be an elaborate portrayal of the romance brewing between Sangram Bhalerao (Ranveer Singh) and Priya Bakshi (Sara Ali Khan).

Coming to colour you in the shades of love!#TereBin out tomorrow! #Simmba@RanveerOfficial#SaraAliKhan@SonuSood#RohitShetty@karanjohar@rspicturez@RelianceEnt@SimmbaTheFilm@TSeries@RFAKWorld@tanishkbagchi@AseesKaur@RashmiVerag@Azeem2112pic.twitter.com/N6oBgwTt77

Sara also added to the lot of new photos on her Instagram page:

While the trailer offered just a glimpse of Sangram and Priya's love story, for the most part, it portrayed Sangram's intriguing journey from being a corrupt cop to a just one. Rohit Shetty, who has several successful cop films to his resume, recently told news agency IANS: "I think the film which shows reflection of a society onscreen gets appreciated by the audience. You can't show vague things as far as cop films are concerned. For a cop film, you have to deal with a problem which is there in the society." Simmba addresses the issue of rape through a telling story.

Simmba is all set to hit screens on December 28. It marks Sara Ali Khan's first film with Ranveer Singh and her second Bollywood film.