Shubh Mangal Zyada Saavdhan Movie Review: The film may be erratic in parts, but its entertainment quotient is delightfully high for a film tackling a clash between conservatism and freedom, between tradition and modernity. 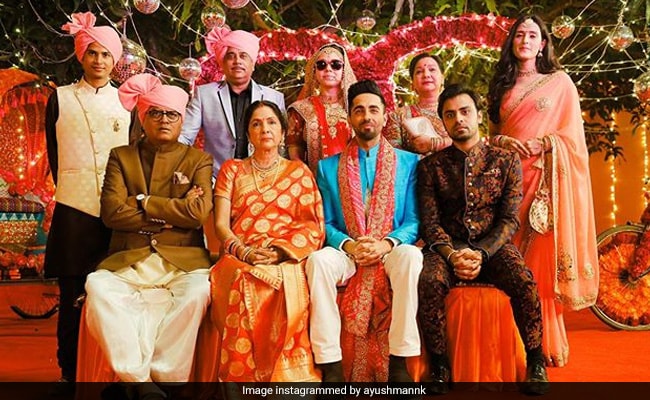 A gay rom-com that exhorts its characters - and its audience - to be extra wary (zyada saavdhan) is only acknowledging its own - and Indian society's - ingrained inhibitions about same-sex love. But debutant director Hitesh Kewalya (who scripted Shubh Mangal Saavdhan before being put in independent creative charge of the follow-up) does a reasonable job of aiming sturdy, humour-laced jabs at homophobia while taking care to soften the blows so as not to rattle the public beyond a point.

The star of the film, Ayushmann Khurrana, and the actor who plays his romantic interest, Jitender Kumar, perform the difficult task of making the audience believe that the two men are so deeply in love that they think nothing of taking on the world. Not easy, but they make light of it, carrying the entire film with them. 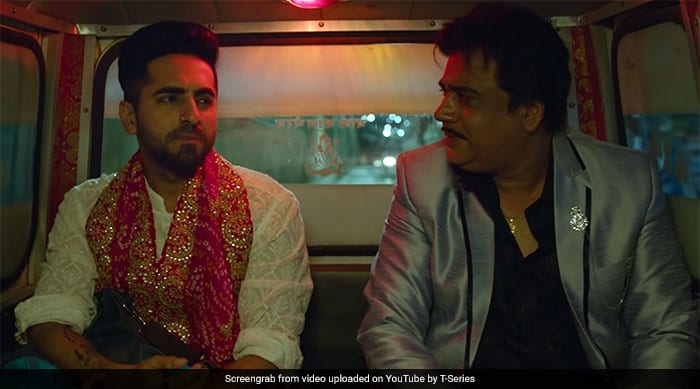 Shubh Mangal Zyada Saavdhan situates its story in the home of the Tripathi family of Allahabad. They are as middle-class as they come and are afflicted with all the prejudices and misconceptions about love, marriage and sex that Indians of their ilk have always nurtured. The brood is headed by Shankar Deenanath Tripathi (a terrific Gajraj Rao), a scientist who develops a variety of black cauliflower that is supposedly more nutritious than the gobi available in the market.

The breakthrough does not go down well with vegetable farmers and agitating cultivators target Tripathi's abode. He thrives on the attention his invention has garnered. Even as matters spiral out of control and curfew is about to be imposed in the city, the Tripathis gear up for the long-awaited wedding of Rajni alias Goggle (Maanvi Gagroo, lively), daughter of Shankar's younger brother, Chaman (Manurishi Chadha in fine form), a failed lawyer who lives in the same household with his combative wife Champa (Sunita Rajwar). 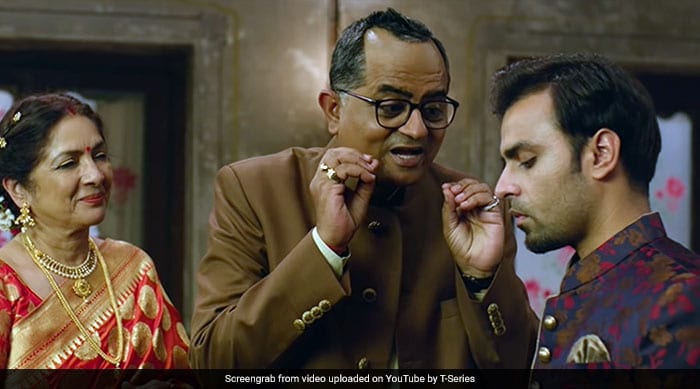 To get to Gomtinagar for the nuptials, the family boards 0377 (note the number of the train) Vivaah Special Express. During the journey, Shankar catches his son, Aman (Jitendra Kumar), and his male lover Kartik Singh (Khurrana) kissing. The old man throws up: he is that repulsed by the act.

During the wedding, Aman and Kartik do a defiant repeat of their PDA. The groom, a middle-aged divorcee, calls off the wedding. Goggle, who had arrived in the shaadi ka mandap on horseback, rides away disappointed. At the railway station, she meets Kartik, who, too, has been thrown out of the wedding as punishment for his intransigence. The former prevents the latter from jumping off an over-bridge and ending her life. 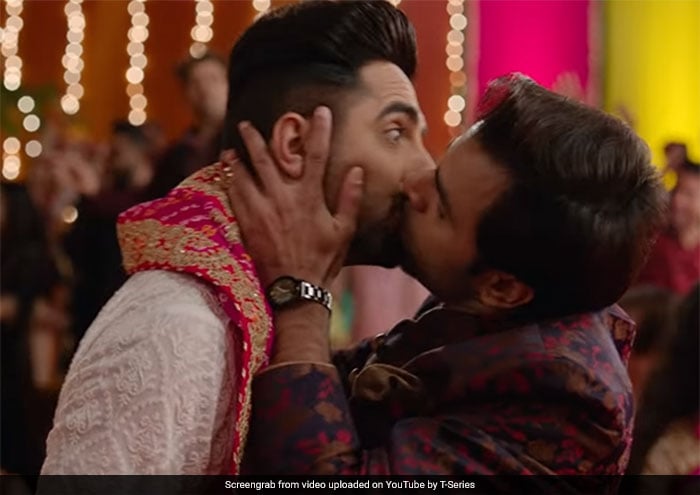 The two spurned souls decide to take the bull by the horns, setting the stage for the second half of the film. The build-up to the final confrontation - it pans out at another wedding on the eve of the Supreme Court's September 2018 judgment on Section 377 - is messy and over-dramatized. Finally, the film trails off into predictable terrain in order to ensure that the audience returns home with some sense of the legal standing of consensual homosexual relations in an ultra-orthodox society such as ours.

On their part, the two principal characters go about their affair without much fuss. In an early scene, to drive home their commitment to all lovers irrespective of the sexual identities involved, Kartik (still wearing his Shaktimaan costume from an advertising drill in a shopping mall) and Aman (riding a mobike that's in urgent need of an overhaul) help a girl (Bhumi Pednekar in a cameo) elope with her lover. It isn't without reason that the film's end-credits song is a remix of Yaar Bina Chain Kaha Re (from Saaheb, a film made 35 years ago), with the gender divides collapsed for good measure.

Shubh Mangal Zyada Saavdhan couches its misgivings about how its target audience will respond to the ticklish theme and deal with the questions that it raises in a bright, breezy and occasionally surreal social comedy that takes swipes at Bollywood's established notions of heroism (the screen persona of Amitabh Bachchan is frequently invoked) and heterosexual love (Laila-Majnu, Shirin-Farhad and Romeo-Juliet are alluded to).

But the radicalism of Shubh Mangal Zyada Saavdhan has its limits. A smooch or two between the two men in love is all that the film is willing to risk. The homosexual lovers are understandably never shown in bed although they do discuss touch and sleeping together. To drive home the point that love, no matter of what kind it is, is science, Aman rattles off the names of a bunch of chemicals and hormones that excite physical passion - dopamine, cortasil, oxytocin. His parents, Shankar and Sunaina (Neena Gupta, outstanding), do not however budge from their belief that gay love is unnatural. 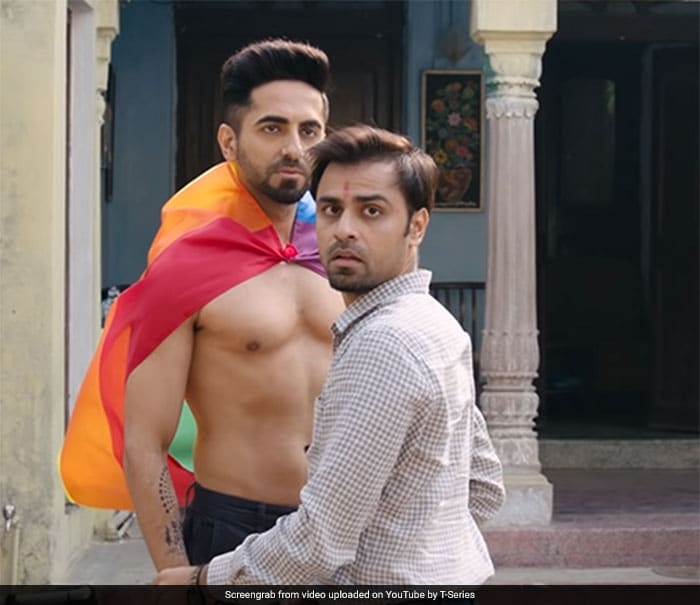 Ayushmann Khurrana, although he has been pushing the boundaries since debuting in the role of a sperm donor (Vicky Donor) and has played a man with erectile dysfunction, is all said and done a mainstream Bollywood star and he can go only this far and no further, which is absolutely fine given the dignified and matter-of-fact manner in which the film treats the relationship between two men.

The only time we see the hero bare-bodied is when he arrives in the midst of the Tripathis a second time around. With a clear plan in mind, he has the gay pride rainbow flag on his back. The timing is significant. The family is in the process of performing Aman's last rites and of rechristening him in the hope that he will turn a new leaf and marry the girl of his mother's choice, Kusum (Pankhuri Awasthy). A livid Shankar storms into the house, emerges with a lathi and rains blows on Kartik as Aman watches the assault helplessly.

The comic flights of fancy do not always take off in the right direction or land smoothly, but with the actors going all out to make the film work, some parts of Shubh Mangal Zyada Saavdhan are genuinely funny and quirky. The film may be erratic in parts, but its entertainment quotient is delightfully high for a film tackling a clash between conservatism and freedom, between tradition and modernity.

Shubh Mangal Zyada Saavdhan is anything but perfect but is easy to watch - and like.