Shilpa Shetty tagged Tiger Shroff in her post and wrote: "The apple doesn't fall far from the tree" 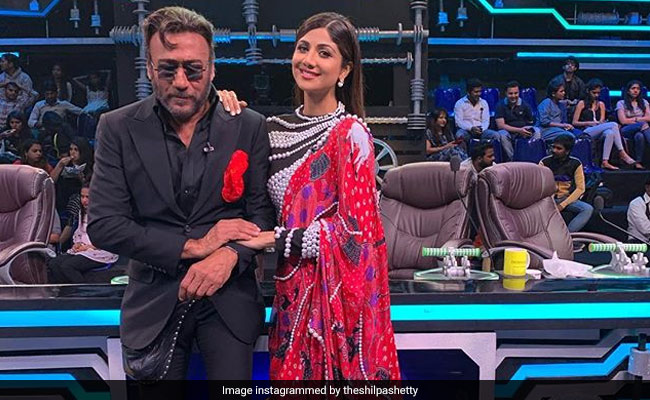 Shilpa Shetty, who is one of the judges on television reality show Super Dancer Chapter 3, frequently shares pictures with her colleagues and friends from the industry and in her latest Instagram entry, the Dhadkan actress posted a picture with the "true hero" of the Indian film industry. In case you still haven't figured who we are talking about, we are referring to Jackie Shroff, who is often referred to as the "Hero" of Bollywood as he featured in Subhash Ghai's 1983 film titled Hero. In her post, Shilpa also referred to Jackie Shroff as a "rockstar" and wrote: "You are such a rockstar, a true "Hero." Was amazing to have you on the sets of Super Dancer Chapter 3. Your simplicity and humility are your weapons... So much to learn."

Shilpa signed off her post with a special note for Jackie Shroff's son Tiger. Shilpa tagged the Baaghi actor and wrote: "The apple doesn't fall far from the tree." Jackie Shroff and Tiger have not responded to Shilpa's post as of now but we are eagerly waiting for their reactions.

You are such a rockstar @apnabhidu .. A true "HERO" .Was amazing to have you on the sets of #superdancerchapter3 .Your simplicity and humility are your weapons..Soo much to learn.. @tigerjackieshroff , the apple doesn't fall far from the tree #respect #hero #superdancer #gratitude #simplicity #humility

Such a cracker of an #episode ( Sunday) with the pretty @kritisanon who's as sweet as a Barfi and #KA @kartikaaryan who's an absolute charmer and the #badshah of #monologue . Wishing you guys the very best .. can't wait to see #lukachuppi . #entertainment #fun #movie #latest #friends #rotfl

How can we forget Shilpa's "fan girl moment," when she shared a picture with Madhuri Dixit?

My #fangirl moment..Meri #Dhadkan #dhakdhak karne lagi, with the one and only @madhuridixitnene ..can't believe what happened on set today ( guys you have to watch #superdancer on Saturday )Thankyou for that #surreal moment..Dancing with you was like a dream come true..Love you even more now. Today was #totaldhamaal #beautiful #evergreen #love #bond #everlasting #connection #specialpeople #nostalgia #moment #makingmemories

Shilpa Shetty has been associated with several reality shows. After winning the British reality show Celebrity Big Brother 5, Shilpa hosted the Indian version of the show - Bigg Boss. She has also appeared as a judge on shows like Jhalak Dikhhla Jaa and Nach Baliye.