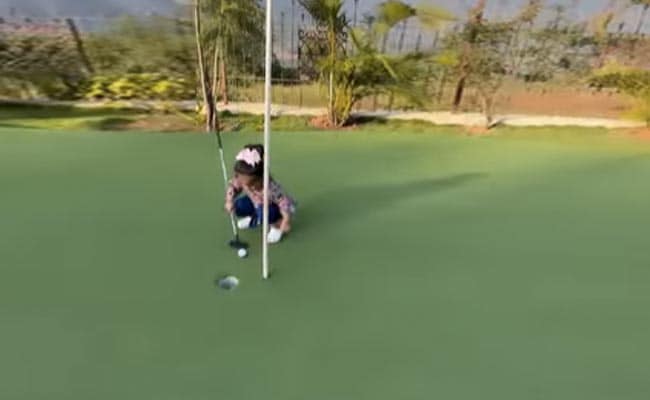 A still from the video. (courtesy: theshilpashetty)

Cute video alert. Courtesy: Shilpa Shetty. Her latest update on Instagram is going to make your Sunday brighter. Guess what? It features her adorable daughter Samisha. In the clip, Shilpa is playing golf. She, first, hits the ball with the intention of getting it in the hole. However, that doesn't happen. So, her cute little munchkin picks up the ball and places it closer to the hole. Samisha then pushes it into the hole with the help of a golf stick. The video ends with Samisha jumping in joy. In the caption, Shilpa addressed Samisha as “Junior Shilpa Shetty Kundra.” She wrote, “Teamwork makes the dream work. Sr. SSK and Jr. SSK working at it.” In the background, we can hear the title track of Chak De! India. Replying to the post, Shilpa Shetty's sister, actress Shamita Shetty wrote, “Hahahaha adorable.” Actor Maniesh Paul wrote, “Hahahahah this is so cute.”

Shilpa Shetty is all hearts for her children– Viaan and Samisha. On Bhai Dooj, she posted a video where Samisha is putting tilak on her brother's forehead. The siblings duo look adorable. “Bhai behen ki yaari hoti hai sabse pyaari (friendship of brother-sister is the most lovely). Happy Bhai Dooj to all,” Shilpa added.

Shilpa Shetty will next feature in Rohit Shetty's Indian Police Force. It also stars Vivek Oberoi and Sidharth Malhotra. Shilpa got her leg fractured while shooting an action sequence on the sets of the film. The actress, a while back, spoke about her recovery journey and how her daughter Shamisha played an integral role in it. “It's been two months today… since my injury. Let me tell you honestly, it's NOT been easy. The mental agony has been as severe as the physical pain. For someone who's a workaholic and a fitness addict like me, these past eight weeks have had its own share of frustration, anger, sadness, and helplessness. But, I found a very strong source of motivation to get better quickly from my daughter. Having Samisha around me for every physiotherapy session. It was only as time passed that I realised how she was waiting EAGERLY for me to “be able to pick her up” again. Those smiles, hugs, little sweet nothings, and kisses were all I needed on some days,” she wrote.

Shilpa Shetty was last seen in Nikamma alongside Samir Soni and Abhimanyu Dassani.