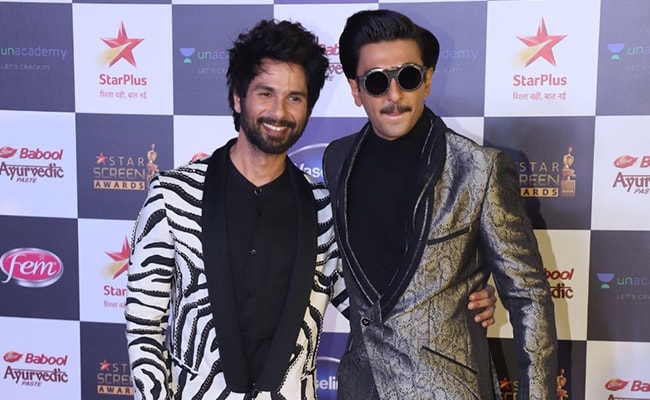 Shahid Kapoor recently found a spot on the trends' list after reports that he walked out of an award show started doing the rounds on the Internet. An exclusive report on Pinkvilla states that the Kabir Singh actor was scheduled to perform at a recently held award show, where he was also expected to win the Best Actor Award: "It was an understanding that Shahid will perform because he was bagging the award. He had rehearsed for the performance too." According to Pinkvilla, things reportedly went awry when eventually the award was given to Ranveer Singh. Shahid reportedly cancelled his performance and walked out of the venue. "The award was then presented to Ranveer Singh and Shahid then supposedly walked out of the show. He was to perform but he decided not to record his performance as well," Pinkvilla quoted a source as saying.

Shahid Kapoor was reportedly upset with the organisers for their "unprofessional" behaviour, the source told Pinkvilla: "Shahid apparently lost his cool on the organisers because it was an unprofessional move on their part to sneakily change the whole scenario. He was reportedly very upset with how the whole thing was addressed." Shahid and Ranveer are co-stars of Padmaavat. They had a reported feud during the shooting of the film and apparently shot their scenes separately.

The Star Screen Awards were held in Mumbai on Sunday evening, when Shahid joined Ranveer on the red carpet for a photoshoot. Later that night, Ranveer went home not only with the Best Actor trophy for Gully Boy but also with Entertainer Of The Year Award.

Gosh! Double Whammy! 'Best Actor in a Leading Role' for #GullyBoy & 'Entertainer of the Year' at the #StarScreenAwards

Following Shahid's reported exit from the show, the organisers were on the look-out for another actor to fill the performance slot for the final edit of the show, which will be telecast on TV later. ETimes reports that Varun Dhawan "agreed to" perform and has already shot the sequence: "Varun was a thorough professional and saved the day by committing to this event. Despite shooting for Coolie No. 1 early morning and having a long schedule he agreed to come in late and shoot his song. Varun danced to a song from Street Dancer 3D."

This year, Shahid Kapoor featured in Kabir Singh which turned out to be a box office hit despite being criticised for promoting violence and misogyny.