"She said she still has two weeks to go back to London and we were shooting a song for Zero in the coming two weeks," Shah Rukh Khan said 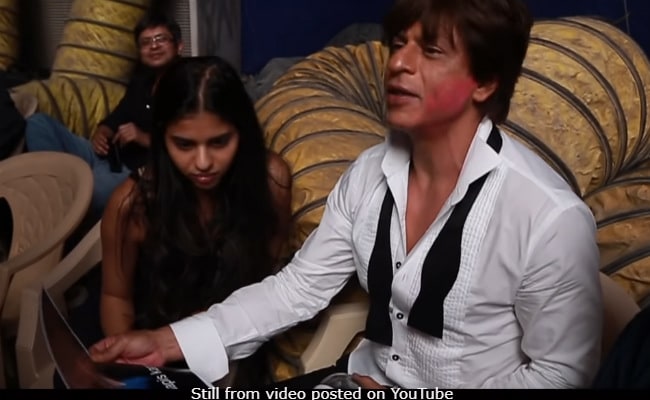 Suhana and Shah Rukh on the sets of Zero (courtesy YouTube)

Remember how Shah Rukh Khan and his teenaged daughter Suhana pranked director Aanand L Rai on the sets of Zero? Well, Suhana was on Zero sets not only as her superstar father's partner-in-crime but also to get acting lessons from the film's team, reported PTI. The news agency quoted Shah Rukh Khan saying at an interview that: "She came on sets because learning acting has a lot to do with spending time on the sets and learning production. She did the same in London and while she was here." Suhana is pursuing studies at England's Ardingly College. Pictures of Suhana Khan from what appeared to be the sets of a shoot was recently went viral on social media, when it was speculated that she was shooting for a short film as a college project.

"She said she still has two weeks to go back to London and we were shooting a song for Zero in the coming two weeks. So she came here to have that experience," Shah Rukh added in his interview.

The 53-year-old superstar added that he took along Suhana to Zero's shooting in Delhi as he wanted her to observe Anushka Sharma and Katrina Kaif, who co-star with Shah Rukh in the film. "I wanted her to see Anushka and Katrina perform live as both are such different kind of actors. Katrina has her own charm and Anushka has her own way of enacting things. So I wanted her to spend time (on sets). So what they did is they put her onto me as an assistant director," PTI quoted SRK as saying.

Shah Rukh Khan, who has always stressed that his children are most welcome to join films but only after completing their education, told PTI: "But I think ground experience is good for actors or any kind of job, only as an internship. But you have to finish your education first. If you have the opportunity to study, it formalises and makes your craft better. So, I want her to study first for some time." Shah Rukh has also often said that while Suhana wants to be an actress, his eldest son Aryan is more interested in filmmaking. Aryan is currently studying films at the University of Southern California.

Shah Rukh Khan, who attended the National School Of Drama and was part of Delhi's Theatre Action Group before his foray in films, added that "formal training" in acting is of utmost importance: "In India, I think we don't learn acting, we just assume that we are talented. Like if you drive very fast, it first means you are going to become a Formula 1 driver. You'll have to finally learn it. So I want her to have a formal training in acting. The experience matters a lot," Shah Rukh added.

On the work front, Shah Rukh Khan is currently looking forward to the release of Zero, in which he features as a vertically challenged character named Bauua Singh.