Shah Rukh Khan Arrives In Maldives With Kids Aryan, Suhana And AbRam Ahead Of The Lion King Release

Shah Rukh Khan, who hasn't signed a film after Zero, is spending quality time with his family. 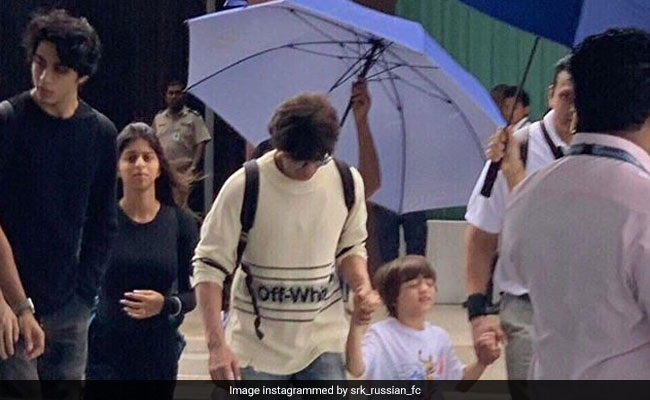 Shah Rukh Khan with his children at the Maldives airport. (Image courtesy: srk_russian_fc)

Ahead of the release of The Lion King in India, in which Shah Rukh Khan and his elder son Aryan have dubbed (for the Hindi version) for the characters of Mufasa and Simba, respectively, the actor and his family took off for a vacation with his family to Maldives. Shah Rukh was spotted arriving in Maldives with his children AbRam, Suhana and Aryan. Shah Rukh Khan held AbRam's hand as they walked out of the airport while Aryan and Suhana walked behind. The Lion King is a live-action remake of Disney's animated film of the same name, which released in 1994, and it is releasing in India on July 19.

Take a look at the pictures of Shah Rukh Khan exiting Maldives airport with his children:

Speaking about working with Aryan in The Lion King, Shah Rukh Khan said in a statement that they were 'excited' about showing the film to AbRam. He had also said, "As a father, I can totally relate with Mufasa and the endearing relationship he shares with his son - Simba... being a part of this iconic re-imagining with my son Aryan makes it extra special for me." On Tuesday, Shah Rukh attended a special screening of The Lion King with his wife Gauri and cubs AbRam, Suhana and Aryan.

Shah Rukh Khan was last seen in 2018 film Zero, which did not fare well at the box office and he hasn't signed his next film yet. However, Shah Rukh Khan is producing a Netflix India Original series, titled Betaal.