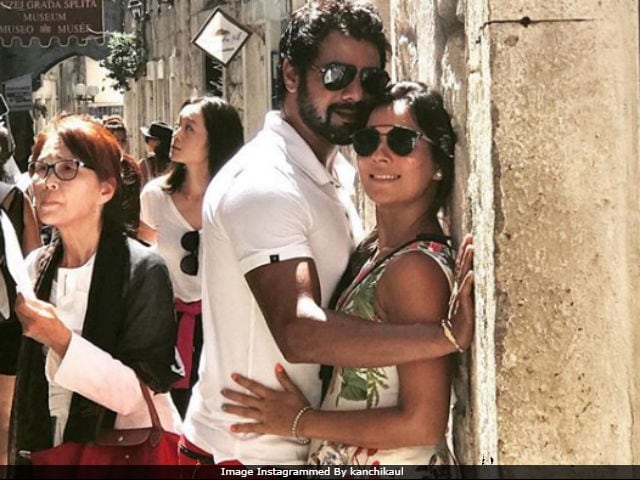 New Delhi: It's television actor Shabbir Ahluwalia's 38th birthday today. Shabbir is celebrating his special day with wife Kanchi Kaul and sons in Croatia. The family went for a holiday earlier this month. Kanchi, a former actress, wished Shabbir with a picture of themselves on Instagram with an adorable caption that reads, "Your birthday marks another year together; Such happy times, I couldn't ask for more, Spending precious minutes, hours and days With you, my love, whom I cherish and adore." Shabbir currently features as Abhi in Ekta Kapoor's Kumkum Bhagya. Shabbir Ahluwalia married Kanchi Kaul in 2011. They are parents to two sons, Azai, 3, and Ivarr, 1.

Here's how Kanchi Kaul wished Shabbir on his birthday.

Your birthday marks another year together; Such happy times, I couldn't ask for more, Spending precious minutes, hours and days With you, my love, whom I cherish and adore. We've shared so much, we two, in love and friendship; Each year our bond just seems to grow and grow. I always want to be right next to you; To be with you means more than you can know. You're always there for me with a loving smile; I'm never happier than when I know you're near. I thought my love for you could not grow stronger; And yet I love you even more this year #happybirthday #myoneandonly #bestfriend #starboy #perfectsoul

Shabbir and Kanchi have constantly kept their Instagram followers with pictures from their vacation diaries. Check out these pictures.

...and so the #bratpack grows !!! Now thats what you call a BUMP....ER BIRTHDAY #happybirthday @sachiinjjoshi it sure is going to be a super special year. Love always and ofcourse lots of bugging too!!!

And here's Kanchi getting major Game Of Thrones feels.

Promoted
Listen to the latest songs, only on JioSaavn.com
Shabbir Ahluwalia has been part of films like Shootout at Lokhandwala and Mission Istaanbul. Shabbir debuted on television with Hip Hip Hurray. He gained recognition after featuring in Kahiin To Hoga. Kyunki Saas Bhi Kabhi Bahu Thi, Kkavyanjali, Kasamh Se and Kayamath are the other shows he's been part of. Shabbir won the third season of reality show Khatron Ke Khiladi.

Meanwhile, Kanchi Kaul has featured in television shows like Ek Ladki Anjaani Si and Maayka. She took a sabbatical post the birth of her sons. Her debut film was Woh Tera Naam Tha, which tanked at the box office.