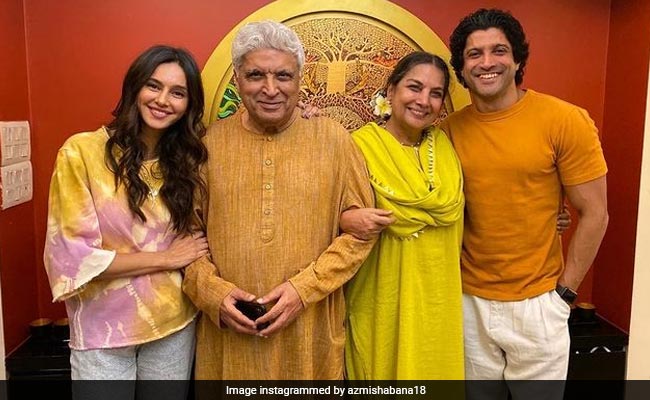 Shabana Azmi, on Friday, updated her Instagram feed with a happy family photo. Her latest post features her husband and renowned lyricist Javed Akhtar, her son and actor Farhan Akhtar and Farhan's girlfriend Shibani Dandekar. In the picture, Shabana Azmi looks pretty in a mustard suit set while Shibani can be seen sporting a printed top and trousers. Javed Akhtar and Farhan Akhtar can be seen twinning in orange outfits. Sharing the photo, Shabana Azmi wrote: "Hassi Khushi" with red heart icons. Reacting to the post, actress Richa Chadha made a reference to Farhan's upcoming film Toofaan and commented: "Toofani, sailab, jalwa and toofan."

Shabana Azmi, who has worked in over 100 films, has won five National Awards. The actress, who is also a renowned theatre artiste, made her Bollywood debut with the 1974 movie Ankur, for which she won her first National Award for the Best Actress.

She has featured in critically-acclaimed films like Arth, Bhavna, Neerja, Khandar, Masoom, Paar, Tehzeeb, Godmother, Fire and Sati among many others. She has also been honoured with the Padma Shri and Rajiv Gandhi Award. Shabana Azmi was last seen in Sheer Qorma, co-starring Divya Dutta.

Javed Akhtar is best-known for writing songs for films such as Silsila, 1942: A Love Story, Veer-Zaara, Main Hoon Na and Jodhaa Akbar among many, many others.

Farhan Akhtar, who has featured in films like Rock On!!, Luck By Chance, Karthik Calling Karthik, Bhaag Milkha Bhaag, Wazir, will next be seen in Toofaan.

Shibani Dandekar is a singer, model and anchor.