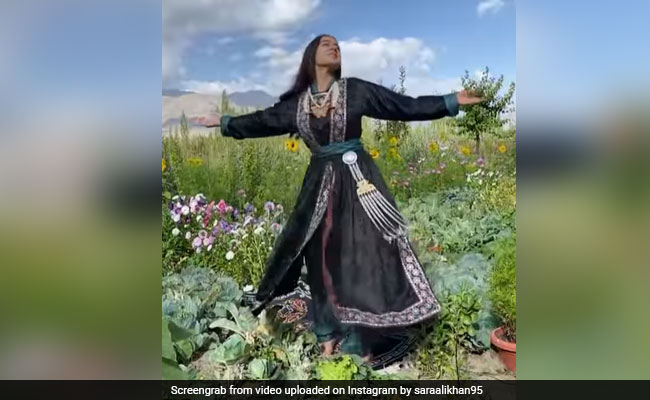 Sara Ali Khan had the time of her life in Ladakh - she may have flown back to Mumbai but her heart is still there. The 26-year-old actress, on Tuesday, shared one of her favourite memories from her trip to Ladakh and needless to say it's a filmy one. In the video, Sara Ali Khan, dressed in a Ladakhi local robe called Goncha, can be seen twirling in a garden full of colourful blooms with the picturesque beauty of the hilly terrains of Ladakh in the backdrop. The setting and the mood reminded Sara Ali Khan of an iconic song from 1981 movie Silsila, starring Amitabh Bachchan, Jaya Bachchan and Rekha. Sara Ali Khan set the video to the song Yeh Kahaan Aa Gaye Hum.

Sara Ali Khan was in Ladakh with actress Radhika Madan, who also featured in one of Sara's recent albums. In the photos, Sara was spotted admiring nature as she wrote: "Prakriti such shanti." Sara also included a photo from her visit to the Maitreya Temple. Meanwhile, Radhika Madan also filled up her Instagram with glimpses of their vacation memories:

In terms of work, Sara Ali Khan stepped into Bollywood with 2018 movie Kedarnath - late actor Sushant Singh Rajput was her first co-star. The same year, Sara also co-starred with Ranveer Singh in Simmba. Sara Ali Khan's filmography also includes Love Aaj Kal with Kartik Aaryan and Coolie No 1 with Varun Dhawan. Sara will next be seen in Atrangi Re alongside Akshay Kumar and south star Dhanush.