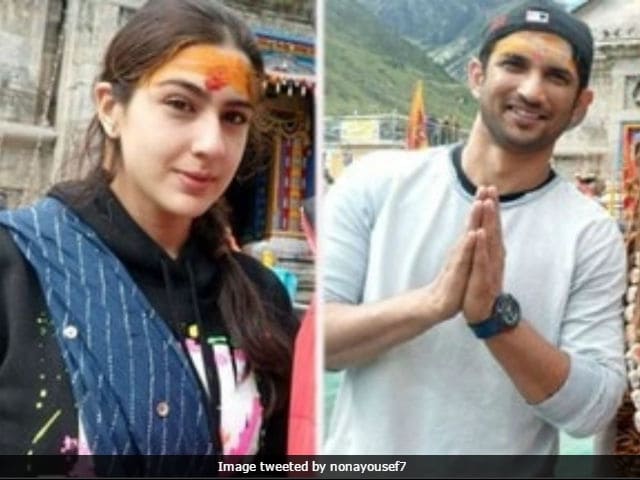 New Delhi: The shooting of Kedarnath, starring Sushant Singh Rajput and Saif Ali Khan's daughter Sara, is all set to begin on September 3 near Dehradun. Before beginning the shoot of the film, the actors were spotted visiting the Kedarnath temple, pictures of which are being shared on social media by the actors' fan clubs. In the pictures, Sara Ali Khan is seen dressed in a blue traditional outfit paired with a black jacket while Sushant wore a white full-sleeve t-shirt paired with denims. The duo were escorted by security men at the temple. Kedarnath, which is being directed by Abhishek Kapoor, marks the Bollywood debut of Sara Ali Khan. See the pictures of Sushant Singh Rajput and Sara here:

@itsSSR & #SaraAliKhan seeking blessing at the holy of kedarnath temple charm in the air , Damn excited to #Kedarnath
"Love is pilgrimage" pic.twitter.com/SDnuYR7y0M

Sushant and Sara's film is a love story set in the backdrop of the holy temple town of Kedarnath in Uttarakhand. In the film, the 31-year-old actor will be seen portraying the role of a pithu, who carries pilgrims to the shrine. Sara will play the role of a young woman, who will be accompanying a pilgrim to Kedarnath.

The first motion poster of Kedarnath was unveiled by the makers of the film on August 19. The short clip showed a trident or Lord Shiva's Trishul with Himalayas in the background. The caption of the motion poster reads, "Love is a pilgrimage."

Sara is the daughter of Saif Ali Khan and his first wife Amrita Singh. Her younger brother is Ibrahim Ali Khan, 19.