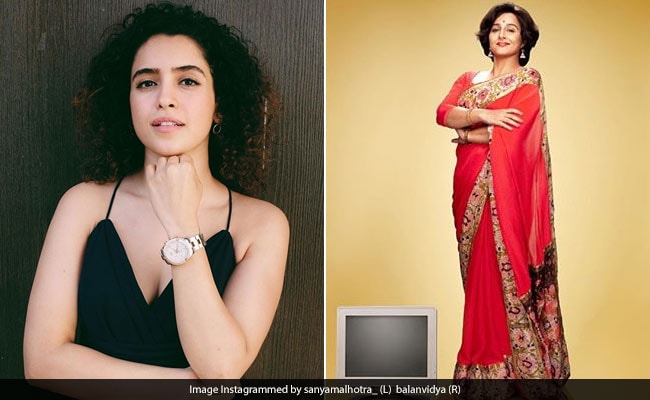 Actress Sanya Malhotra occupied a spot on the list of trends on Sunday after she announced that she will play the role of Shakuntala Devi's daughter Anupama Banerji in Vidya Balan's film. Sanya, who has worked in blockbusters such as Dangal and Badhaai Ho, is pretty "excited" to play Anupama in Shakuntala Devi. Revealing details about her onscreen role through a video, Sanya Malhotra shared a post on her Instagram profile on Sunday and wrote: "Excitement quotient is max! Time to trace the co-ordinates of Shakuntala Devi's daughter, Anupama Banerji's journey." Last week, Vidya Balan released the first look and teaser of her work-in-progress film, which is based on the life of Shakuntala Devi, a mathematical wizard known for her ability to solve difficult math problems with ease.

And now, here's Sanya Malhotra's post we are talking about:

Speaking about joining the team of Shakuntala Devi, Sanya Malhotra told news agency PTI that she is "thrilled to work with Vidya Balan" and added: "I am very excited to play the iconic Shakuntala Devi's daughter - Anupama Banerji. Everyone knows the achievements of the math genius Shakuntala Devi. I'm thrilled to bring on screen this dynamic mother - daughter relationship."

Directed by Anu Menon, the film is slated to release next year. Talking about working with Sanya Malhotra, Anu Menon told PTI that she "can't wait" to start filming with her. "Sanya instinctively understood Anupama Benerji's character and her journey and I can't wait to start shooting with her. I think the audience will fall in love with both Sanya's and Vidya's characters," she said, reported PTI.

Shakuntala Devi gained the title of 'human computer' because of her extraordinary ability to solve difficult math problems easily. Her intelligence was first discovered at the age of 5, when she solved a math problem for 18-year-old students. She also earned a place in the 1982 edition of The Guinness Book of World Records. Apart from her love for mathematics, she was an astrologer, cookbook author and a novelist. She died at the age of 83 in 2013 in Karnataka.