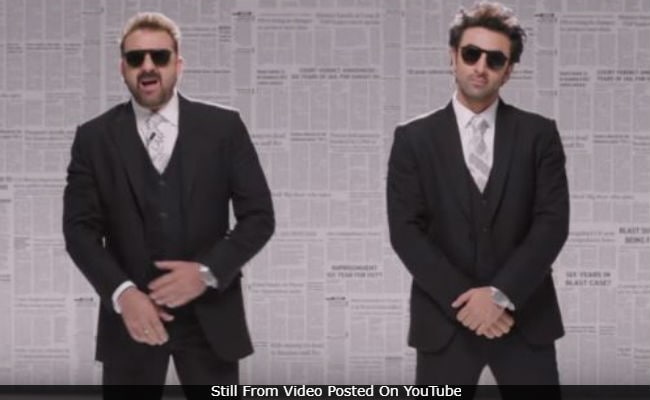 Ranbir Kapoor's Sanju took a roaring start at the box office on Friday and it is believed that the film will cross Rs 100-crore mark at the box office today. While the makers of the Sanju are rejoicing over the success of the film, they also treated Ranbir and Sanjay Dutt's fans with a new song, featuring both the stars. Titled Baba Bolta Hain Bas Ho Gaya, is a special song in Sanju, used in the end credits of the film. The song is a satire on the news that have featured on Sanjay Dutt and his life. Newspapers clippings are used in the background. Sanju is based on the life of Sanjay Dutt and this special song was filmed some weeks ago. Baba Bolta Hain Bas Ho Gaya is sung by Papon, Ranbir Kapoor and Supriya Pathak.


A still from the song had got leaked earlier this week and was shared widely on social media.

Of the special song, a source had told Indian Express, "This film is a rollercoaster ride of emotions, love and friendship. And we wanted to make a fun song that depicts Sanjay Dutt's relationship with the media. This song will be part of the end credits. It will surely make the audiences' experience a complete journey of his life."

Meanwhile, Ranbir Kapoor's Sanju has already earned over Rs 73 crore at the box office and is also the biggest opener of 2018.