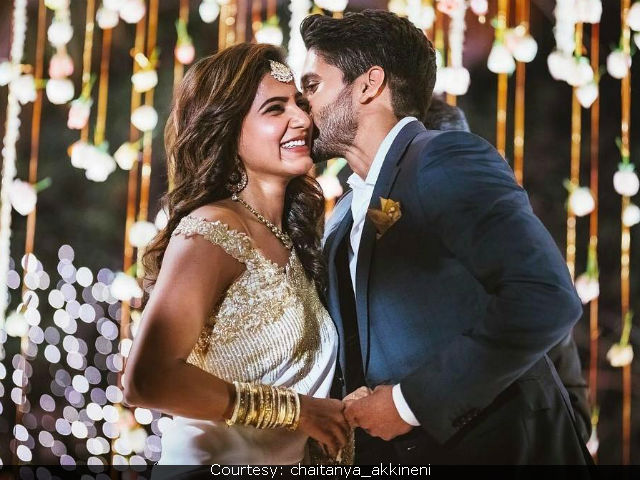 New Delhi: Telugu star Samantha Ruth Prabhu, who got engaged to long time beau Naga Chaitanya in January, posted an adorable picture of the couple on the occasion of Valentine's Day. She wrote, "What's in a day.. more like all day, everyday #loveofmylife." Samantha, 29, and Naga Chaitanya, 30, exchanged rings on January 29 in a closed-knit ceremony attended by family and close friends. The duo first met on the sets of 2010 film Ye Maaya Chesave and later on co-starred in two other films. It was in 2015, that the couple officially announced their relationship. Naga Chaitanya is the son of Telugu superstar Nagarjuna and Lakshmi Ramanaidu Daggubati. Here's what Samantha posted:

What's in a day.. more like all day , everyday #loveofmylife

Samantha and Naga Chaitanya's engagement was no less than a fairy tale ceremony and the pictures on social media are a proof of that. It was one of the most-talked about ceremonies of the southern film industry and right after the couple announced their engagement, they became one of the top trending topics of the Internet.

Check out these pictures of Samantha and Naga Chaitanya from their engagement diaries:

My happiness has always been in the littlest of details #airamydoll

Earlier, Naga Chaitanya shared his wedding plans with news agency IANS and said that the couple is planning to get married in 2017. "I'm a very private person and I never felt the need to speak about my relationship in public. My friends have known about it for a long time. Then, when we informed our families, they supported our decision. We plan to get married next year."

As for Samantha and her future projects, the groom-to-be said: "I don't think I'd ever tell her what she should and shouldn't do. I'm proud of her growth as an actress and I will encourage her to continue working. It was through sheer talent and hard work she got where she is today. I don't think she should throw away her successful career because of marriage," reported IANS.

Promoted
Listen to the latest songs, only on JioSaavn.com
In December 2016, his actor brother Akhil Akkineni also got engaged to designer Shriya Bhupal in an elaborate ceremony in Hyderabad. Both brothers - Akhil and Naga Chaitanya are reportedly interested in a destination wedding in a foreign locale.