Salman Khan On Changing Film's Title To Loveyatri: 'We Don't Want To Hurt The Sentiments Of People'

"We are making a love story not a hate story," said Salman Khan 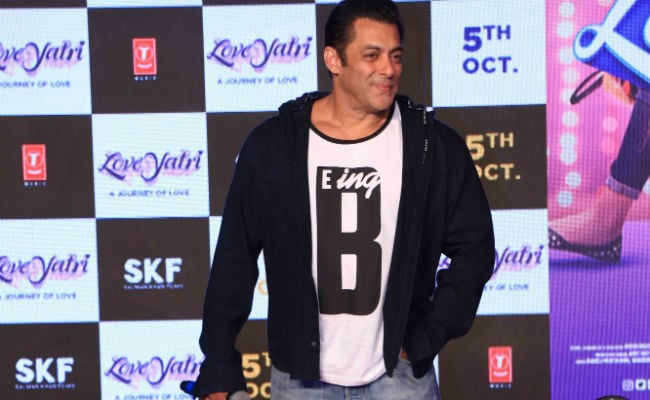 Salman Khan during the promotions of Loveyatri.

Title- Salman Khan On Changing Film's Title To Loveyatri: 'We Don't Want To Hurt The Sentiments Of People' Highlights- The film was earlier titled Loveratri Loveyatri is set against the backdrop of Navratri The film is slated to release on October 5 Caption- Salman Khan during the promotions of Loveyatri. Excerpt- "We are making a love story not a hate story," said Salman Khan Fb Desc- "If people have objection with current title of the film, we will change that also"

Salman Khan, producer of upcoming film Loveyatri, said that he changed his film's name from Loveratri because he had no intention of "hurting people's sentiments," reports news agency IANS. Salman Khan was speaking at an event to promote Loveyatri on Wednesday and a day later, on Thursday, the Supreme Court gave its verdict against changing the film's name again and directed that "no coercive action shall be taken against it relating to the content and the name of the movie." On Wednesday, Salman Khan said: "This film is set in Gujarat during the festive time of Navratri. If any person feels that it's an offensive title, we will change it. We don't want to hurt sentiments of people because we are making a love story not a hate story."

The film's name was changed to Loveyatri, a few months after Vishwa Hindu Parishad (VHP) had protested against the film's previous title Loveratri and alleged that it 'distorts the meaning of the Hindu festival.' Several complaints were also filed against the film, alleging that its name has hurt the religious sentiment.

Talking about the film's current title, the 52-year-old actor added, "If people have objection with current title of the film Loveyatri, we will change that also and release it as an untitled film." Last week, Salman Khan made the announcement about the change of film's title on social media and wrote: "This is not a spelling mistake... Loveyatri."

Loveyatri will open in theaters on October 5.