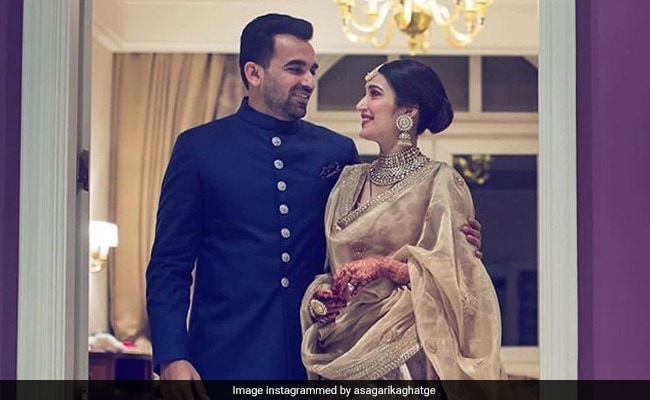 Actress Sagarika Ghatge and former cricketer Zaheer Khan are celebrating their first wedding anniversary by sharing the same throwback photo. The photo shared by Sagarika and Zaheer is from their wedding reception, which took place in November last year. "So incredibly thankful for you! Happy anniversary love. Cheers to forever," Sagarika captioned the photo. Zaheer's heartfelt message for Sagarika read: "One year flown by - many lifetimes to go! Happy anniversary SK." Sagarika and Zaheer opted for a court marriage on November 23 last year, which was followed by a mehendi and a sangeet function and a grand reception party. Sachin and Anjali Tendulkar, Yuvraj Singh's wife Hazel Keech and actress Vidya Malavade had attended Sagarika and Zaheer's wedding functions.

So incredibly Thankful for you !!! Happy anniversary love. - cheers to forever

One year flown by - many lifetimes to go !!! Happy anniversary SK

Sagarika Ghatge and Zaheer Khan flew to Maldives for a short vacation last month. They planned their trip in a way that it incorporated Zaheer's birthday in the itinerary. Zaheer's former colleagues Ajit Agarkar, Ashish Nehra and Yuvraj Singh were also spotted in the birthday pictures shared by the couple on their respective Instagram handles.

Take a look at some of the photos shared by Sagarika Ghatge and Zaheer Khan from their Maldives vacation:

Happy birthday to the love of my life the kindest , strongest, thoughtful and most giving. Happy happy birthday husband. I love you

Zaheer Khan was part of the Indian cricket team for 14 years. He announced his retirement from international cricket in 2015.