Sagarika Ghatge and Zaheer Khan opted for a court marriage, which will be followed by a grand reception 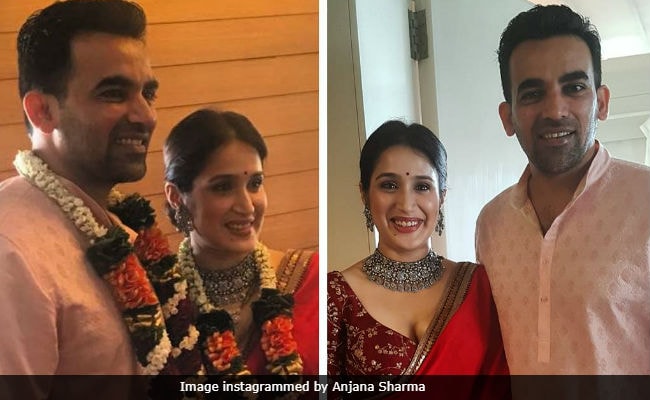 New Delhi: Actress Sagarika Ghatge and cricketer Zaheer Khan are now married. They opted for a court marriage on November 23, which will be followed by a grand reception for Bollywood celebs and Zaheer Team India colleagues on November 27 in Mumbai's Taj Mahal Palace and Tower. Sagarika looked stunning in an orange sari with a maroon embroidered blouse. She wore a spectacular necklace with matching earrings and tied her hair in a tight bun. Zaheer Khan wore a soft pick kurta. The couple looked happy as they posed together for their friend Anjana Sharma, who shared the couple's first pictures.

And its done...my last partner in crime...@zaheer_khan34 @sagarikaghatge ...let the party begin

A day before the wedding, Vidya visited her friend and shared a glimpse of what the 'mad bride' was up to. She shared a picture of Sagarika decked in jewellery of all sorts - clearly confused which one to pick.

And the madness begins .. tomorrow !!! #bridetobe .. #blessings & more blessings to my gorgeous sister from another mister #weddingbells#zakgetssakedpic.twitter.com/FxVGSXdaV6

Sagarika also shared a glimpse of Sagarika and Zaheer's wedding car on Instagram live. The card she shared was an invite for the wedding reception and it was accompanied by a special customized box of chocolates.

When she was preparing for the wedding, Sagarika told news agency IANS: "Like everybody who is getting married, I think there is always stress, yet there is a lot of excitement because it's a wedding that you are planning. So, we have all those emotions going on right now."

Promoted
Listen to the latest songs, only on JioSaavn.com
Sagarika Ghatge debuted in Bollywood in 2007 film Chak De! India and has also featured in films like Rush and Irada. She has also featured in Marathi film Premachi Goshta and Punjabi film Dildariyaan. Sagarika's upcoming project is a bilingual film called Haadsa.