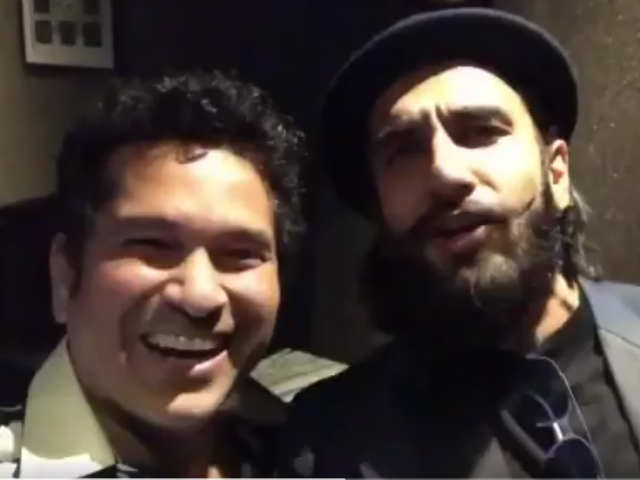 New Delhi: Cricketer Sachin Tendulkar has been quite active on Twitter these days. Apart from officially launching his mobile app 100MB on March 30, Sachin Tendulkar unveiled his debut song Cricket Wali Beat on the sets of Indian Idol 9 Grand Finale on Sunday. The cricketer, who collaborated with Sonu Nigam for his maiden track, released his song exclusively on his newly-released app. Recently, Sachin caught up with actor Ranveer Singh and posted a video along with him on Twitter. The 31-year-old actor, who is known to wholeheartedly support other artists, gave a big shout out to Sachin Tendulkar's app urging fans to download it. In the video, the Bajirao Mastani actor praised Sachin Tendulkar, saying that he is definitely an all-rounder.

Amazing time catching up with @ranveerofficial yesterday. Here's a special shout out from him. Watch & share! #100MBhttps://t.co/jIoKVvOR2Rpic.twitter.com/omOetxRnar

In an interview with news agency IANS, singer Sonu Nigam said there was no need to modify Sachin's voice technologically. He said: "He is a very good singer. We did not use pitch corrector on his voice as he was singing in the right sur (tone) and (despite being) the shy person that he is, he got extremely comfortable the moment I kind of increased the masti (fun) quotient while we were shooting the video. It was wonderful and I am very happy that people are loving the song."

"Sachin Tendulkar is a phenomenon not just for India, but for the world, especially for the world of cricket. When he is given the title of God, it's not just by chance. His whole demeanour, whole career, entire reputation and the spotless career that he has had, is the reason why he is called the God of cricket," Sonu Nigam told IANS.

Promoted
Listen to the latest songs, only on JioSaavn.com
Meanwhile, Ranveer Singh, who was last seen in Aditya Chopra's Befikre, is currently busy shooting for Padmavati. The film, directed by Sanjay Leela Bhansali, also features Deepika Padukone and Shahid Kapoor in lead roles.