Saand Ki Aankh is based in the life of Chandro Tomar and her sister-in-law Prakashi Tomar, who began sharpshooting in their fifties 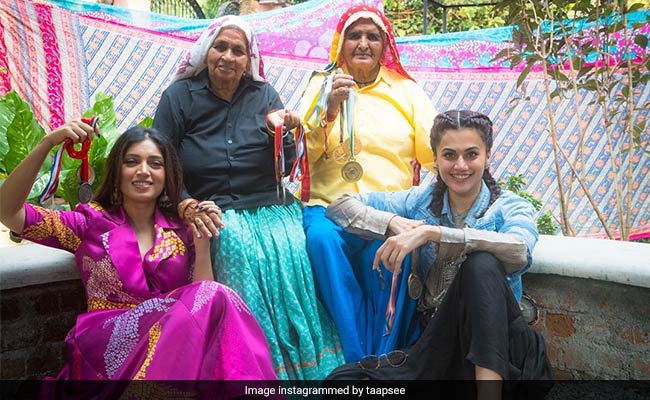 Taapsee Pannu and her Saand Ki Aankh co-star Bhumi Pednekar occupied a spot on the trends list all of Wednesday, after the duo shared pictures from the film's set on their respective Instagram profiles. Both the actresses shared pictures from their preparatory session in the film. In one of the pictures, Taapsee and Bhumi, dressed in bright ghagras, can be seen swinging from a tree. Both the actresses shared identical posts and captioned it: "Hawaon ka rukh badal raha hai... Bas jald hi jhulte aar he hain." They accompanied the posts along with the hashtags "#SaandKiAankh" and "#ComingSoon."

On Tuesday, Bhumi and Taapsee, shared a picture of themselves on their respective social media accounts. Taapsee tagged her co-star from the film and wrote: "Ke khushbu aan lag rahi hai... Dikhe kuchh kamaal ka pak raha hai. What say."

Here are some more pictures from the sets of Saand Ki Aankh.

Taapsee announced her association with the project by sharing a picture of herself along with Bhumi and she wrote: "Yo raha title, kyunki maney na dikhti chidiya ki aankh, maney toh saand ki aankh dikhe hai. Proud to be a part of this journey which will bring to you the story of these women who fought all odds to change destiny."

Proud to be a part of this journey which will bring to you the story of these women who fought all odds to change destiny ! #SaandKiAankh @tusharhiranandani @anuragkashyap10 @reliance.entertainment #NidhiParmar

In Saand Ki Aankh, Taapsee and Bhumi will be seen playing the role of Chandro Tomar (87) and her sister-in-law Prakashi Tomar (82), who began sharpshooting in their fifties. The film marks the directorial debut of Tushar Hiranandani, who has written films like Grand Masti, Ek Villain and Dishoom. The film will collaboratively be produced by Anurag Kashyap and Nidhi Parmar.