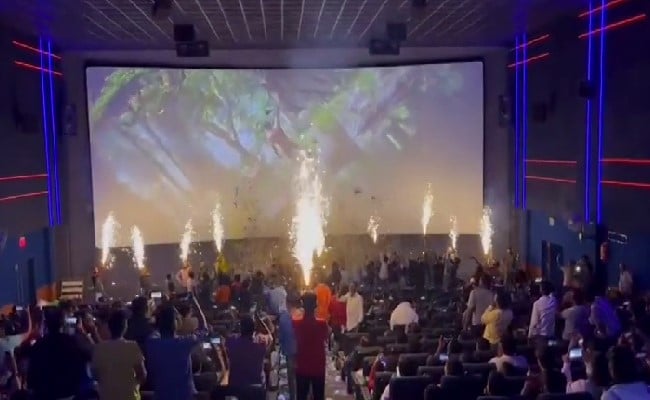 Fans were eagerly waiting for the release of S S Rajamoli's RRR and today, it released in theaters and received love from the audiences. In one of the videos shared by a fan page, Jr NTR's fans can be seen waving flags in the theater after the actor's entry. The flags have Jr NTR's photo on them. The video is going viral on the web and everyone is praising Jr NTR's acting in the film. RRR has been directed by S S Rajamouli and also stars Ram Charan and Alia Bhatt in key roles. Ajay Devgn has a cameo role in the film. This is the first time Ram Charan and Jr NTR are working together on a film.

Check out the video below:

Not just this, an ardent fan was seen pouring milk on Jr NTR's poster. The video is going viral and Jr NTR's fans are praising the actor.

Seeing the love of his fans, Jr NTR thanked them and wrote, "Thank You, each and every one, for your unwavering love. Your love, admiration and support are what keeps me going...Enjoy the visual spectacle that is #RRRMovie."

Thank You, each and every one, for your unwavering love.

Your love, admiration and support is what keeps me going...

Enjoy the visual spectacle that is #RRRMovie.

RRR stands for Rise, Roar, Revolt. DVV Entertainment has backed RRR and it is based on two freedom fighters - Komaram Bheem and Alluri Seetharamaraju, who fought against the British Raj and Nizam of Hyderabad. The songs of the film are also blockbusters and everyone is seen grooving to the songs.

Reportedly, S S Rajamouli's RRR is made on a budget of Rs 336 crore. And, this doesn't include the salary of the star cast and the crew members. The release date of the film was postponed many times due to the coronavirus.