Roohi Review: Best To Lay The Ghost Of Janhvi Kapoor's Horror-Comedy To Rest

Roohi Review: Rajkummar Rao is funny in parts but as the absurdist plot careens out of control, he looks as lost as the feckless character he is on the screen. 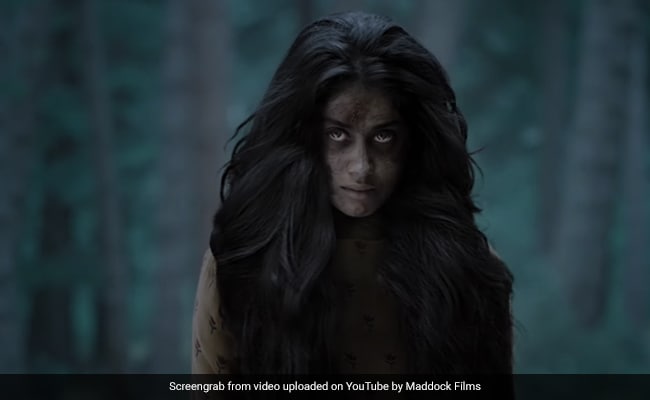 Roohi Review: Janhvi Kapoor in a still from the film. (Image courtesy: YouTube )

A wild, weird goulash of heavy-handed hinterland hocus-pocus, perplexing pop psychology and dashes of broad humour pressed into the service of a horror-comedy, Roohi, helmed by Hardik Mehta, is a film whose ambitions far outstrip its output. That is not to say that the screenplay is completely devoid of flashes of inspiration but these bright spots are not strong enough to withstand self-indulgent genre excess.

In many ways, Roohi is reminiscent of Stree and not only because both have emerged from the Maddock Films stable and feature Rajkummar Rao as the male lead. The actor trades the tools of a ladies' tailor - that is what he was in Stree - for the camera of a crime reporter working for a nondescript rag called 'Muzirabad Zalzala' and throws in mannerisms borrowed from the characters that he played in Ludo and Bareilly Ki Barfi.

He is definitely funny in parts, but as the absurdist plot careens out of control and turns more and more unwieldy, the actor looks as lost as the feckless character he is on the screen. He is a shivering wreck when confronted with a twist that foxes him out of his wits - the girl he loves isn't as attainable as he thinks she is for she might not be of this world at all.

Rao makes these scenes count for whatever they are worth but the inconsistent script - screenwriters Mrighdeep Singh Lamba and Gautam Mehra are hard-pressed to give the flighty plot premise a smooth and steady path - lets him down at crucial junctures. An earthy lingo, a wayward diction and an icky demeanour lend his and co-actor Varun Sharma's personas an air of harmless insouciance, one of the more effective elements that Roohi manages to conjure up.

While Stree was about the wandering spirit of a wronged woman who went about kidnapping men at night at a particular time of the year, this one forays more into the mental derangement space without caring to explain what it is exactly that lies behind the anger (or anguish) of a schizophrenic girl who, as we can vaguely surmise, has received the wrong end of the stick from her family and the misogynistic society she is a part of. There is a flashback to a wedding that is marred by blood on the feet.

Janhvi Kapoor has to literally jump out of her skin - or, to be more precise, disappear behind heavy prosthetic layers - to play this woman with a split personality. But it seems it isn't mere variable mental states that she is dealing with. She is also a mudiya pairi, literally a churail whose feet point backwards. She makes her presence felt by whisking away a new bride when the husband dozes off on the wedding night.

Between the grovelling and growling that this troubled damsel does, she pulls two childhood pals, Bhawra Pandey (Rajkummar Rao) and Kattanni Qureshi (Varun Sharma), in different directions. The boys fall in love with her - one with the docile Roohi, the other with her frightening, destructive avatar.

The story is set in a village called Bagadpur off the small town of Muzirabad. There is apparently a real hamlet by that name in Uttar Pradesh not far from Delhi but it is made amply clear that the location in the film occupies a fictional landscape where Bhawra and Kattanni work for Guniya Shakil (Manav Vij). The latter uses two hatchet men, Pandit and Riyaz, to kidnap girls for the forced marriages that are a tradition here.

Roohi adopts a grungy documentary style at the outset as a journalist from the west (Alexx O'Nell) enlists Bhawra and Kattanni's help to document the area's custom of kidnapping women and forcing them into marriage against their will. The western scribe's camera captures one such kidnapping. A girl is accosted outside her college and bundled into a getaway car. As she struggles to free herself from her captors, the girl is told by her would-be mother-in-law: "Engineer hai mera beta, bahot pyaar she rakhega tujhe."

The rest of the night does not turn out the way other such nights have turned in this neck of the woods. An indication is provided by the camera moving away from the house and looking in through the branches of a tree with eerie hissing on the soundtrack. There is somebody out there not quite willing to take the reprehensible spectacle lying down. If you love the bizarre, this might not be a bad starting point. But when grotesque kicks in, the film encounters turbulence that it never quite flies out of.

Roohi, who herself is treated with disdain by her extended family, has a mission in life - or maybe afterlife, it is never quite clear - that takes her to a place called Chimmatipur, where supposedly holy men who specialise is exorcism. What is somewhat more comprehensible is that a spirited avenger is trapped in a meek body that wants to revolt against the injustice that is meted out to women.

The film seeks to subvert genre conventions and venture into the terrain of feminist rebellion. It delivers a reasonably passable first half - it is enlivened by Varun Sharma's comic timing - but then meanders into a post-interval stretch that limps around in circles until a bizarre twist in the climax sends us home scratching our heads and wondering what on earth has hit us.

Mehta made the National Award-winning documentary Amdavad Ma Famous a few years ago and followed it up with the endearing Kaamyaab, which incidentally landed in our midst a week before cinema halls were shuttered last year. Producer Dinesh Vijan, who co-produced Stree, was behind Angrezi Medium, the last film to hit the screens before the coronavirus lockdown began.

That apart, Roohi is the first Hindi theatrical release in well over a month. The question is does it have the force to pull audiences back to the multiplexes. Unlikely. It certainly isn't the vaccine of hope and delight that filmgoers, starved of big-screen entertainment for a whole year, need at this hour.

The blood-curdling banshee-wail that the titular female protagonist lets out in the climax of Roohi is ear-splitting all right, but it isn't exciting enough for filmgoers to sit up and respond to it in the way that they would to a more coherent clarion call. It is best to lay this ghost to rest and wait for a better deal.