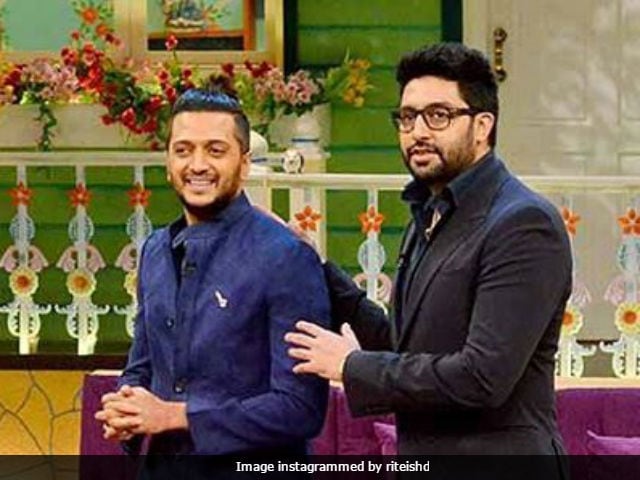 New Delhi: Actor Riteish Deshmukh shared an adorable throwback picture of the Bachchan family on social media. In the black and white photograph shared by the 38-year-old actor, the mundan ceremony of Abhishek Bachchan can be seen taking place. Amitabh Bachchan, along with Jaya Bachchan looks quite happy in the adorable picture. Riteish Deshmukh has co-starred with Abhishek Bachchan in films such as - Rohan Sippy's Bluffmaster! (2005) , Ram Gopal Varma's Naach (2004) and Sajid-Farhad's Housefull 3(2016). The duo also made a cameo appearance in 2005 film Home Delivery starring Vivek Oberoi, Ayesha Takia, Mahima Chaudhary and Boman Irani.

See the adorable picture shared by Riteish Deshmukh below:

Promoted
Listen to the latest songs, only on JioSaavn.com
Riteish Deshmukh was last seen in the 2016 movie Banjo opposite Nargis Fakhri. The film, directed by Ravi Jadhav, was declared a flop at the box office. The Humshakals actor will next be seen in Bank Chor, co-starring Vivek Oberoi and Rhea Chakraborty. The film, which is a comedy thriller, will release in a 16D version along with virtual reality and augmented reality formats. The makers of the film released the first poster of Bank Chor on March 31. The movie is scheduled to release in theatres on June 16. Riteish Deshmukh will also feature in Marathi film, titled Mauli.

Abhishek Bachchan was last seen in Sajid-Farhad's Housefull 3. The film, which was the third installment of the Housefull film series, also featured Akshay Kumar, Jacqueline Fernandez, Nargis Fakhri and Lisa Haydon. The 41-year-old actor is committed to working with Ronnie Screwvala in his next venture. His other upcoming projects are - Prabhu Deva's Lefty, Priyadarshan's Bachchan Singh and Nishikant Kamat's next project.