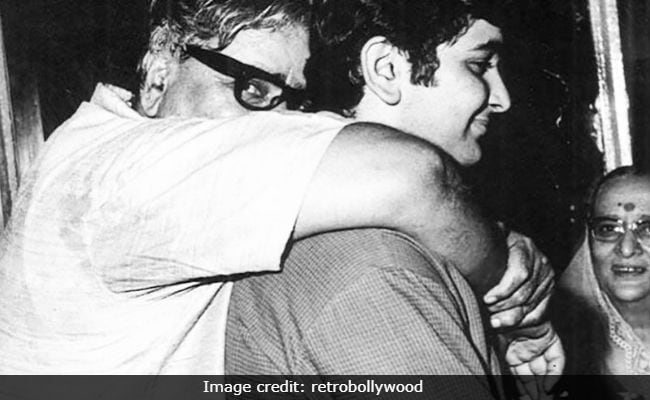 Throwback Thursday came a day early for actor Rishi Kapoor, who shared an old heartwarming picture of himself with his grandparents on Twitter. Rishi Kapoor posted a screenshot of the picture which was originally shared by a Bollywood fan page on Instagram. In the photo, a young Rishi Kapoor received a hug from his grandfather Prithviraj Kapoor as his grandmother Ramsarni Mehra Kapoor smiled. "So much of warmth and so many blessings from him. With my grandparents. Thank you," Rishi Kapoor captioned the post. The actor celebrated his 66th birthday on Tuesday with his family and it appears that he was missing his grandparents.

So much of warmth and so many blessings from him. With my grand parents. Thank you pic.twitter.com/5SWnlFZwWK

Prithviraj Kapoor was the first generation actor in the Kapoor family and he is often credited as the pioneer of Indian theatre. Prithviraj Kapoor is best known for his roles in films such as Anand Math (1952), Pardesi (1957) and Mughal-e-Azam (1960). He also started a travelling theatre company, named Prithvi Theatres. Several years later, his son Shashi Kapoor built a theatre of the same name in his father's memory. Prithviraj Kapoor was hounoured with the Padma Bhushan in 1969.

Rishi Kapoor, son of actor Raj Kapoor, is from the third generation of actors in the Kapoor family. He has a commendable career spanning over four decades. He was among the top crop of actors in the Seventies and the Eighties. Over the last few years, Rishi Kapoor has featured in critically acclaimed films such as Mulk, 102 Not Out, Agneepath and Kapoor & Sons among others.

The Kapoors recently featured in headlines after Rishi Kapoor and his elder brother Randhir Kapoor (also an actor) confirmed they are selling their father's RK Studio because it was registering losses after a fire destroyed a major portion of the studio last year.