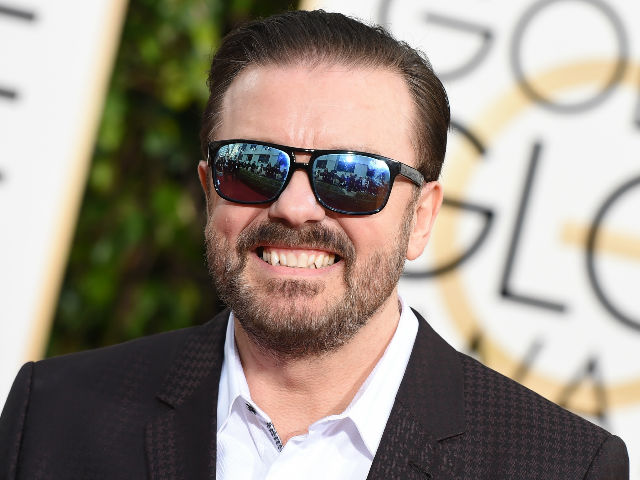 Los Angeles: The only reason Ricky Gervais was invited back to host the Golden Globes for the fourth time was that producers hoped he would say wildly offensive, controversial things and everyone would tune in to catch the cruelty.

Well, mission sort of accomplished - Gervais didn't go too over the top, and some of his jokes were pretty lame. But here's a list of the people that he likely offended the most, in order of how quickly he might want to go the other way if he sees them on the street. (Also Read: How Ricky Gervais Provoked Hollywood at Golden Globes)

Introducing presenter Matt Damon - "The only person Ben Affleck hasn't been unfaithful to."

"The excellent Spotlight has been nominated. The Catholic Church are furious about the film, as it exposes the fact that 5 percent of all their priests have repeatedly molested children and been allowed to continue to work without punishment. Roman Polanski called it the best date movie ever."

While discussing Jennifer Lawrence and Amy Schumer's movies: "Joy and Trainwreck: No, not the names of Charlie Sheen's two favorite hookers."

On Mel Gibson: "I want to say something nice about Mel before he comes out, so, oh yeah, OK, here you go. I'd rather have a drink with him in his hotel room tonight than Bill Cosby."

"I want to do this monologue and then go into hiding, OK? Not even Sean Penn will find me. Snitch."

"What a year she's had. She became a role model for trans people everywhere, showing great bravery in breaking down barriers and destroying stereotypes. She didn't do a lot for women drivers, but you can't have everything, can ya?"

"I made a joke about Mel Gibson getting a bit drunk and saying a few unsavory things. We've all done it. Wasn't judging. But now I find myself in the awkward position of having to introduce him again. Listen, I'm sure it's embarrassing for both of us and I blame NBC for this terrible situation. Mel blames ... we know who Mel blames. I still feel a bit bad for it, Mel's forgotten all about it, apparently. That's what drinking does."

"To be fair, The Martian was a lot funnier than Pixels, but then again, so was Schindler's List."

All celebrities in attendance

Greeting the audience: "Shut up! You disgusting, pill-popping, sexual-deviant scum." Introducing Morgan Freeman: "The next presenter is the most respected actor in the room. That isn't saying much."

"The Golden Globes are about excellence. To win one, you have to do something amazing. Neither of our first two presenters have won a Golden Globe. I don't know what they are doing here really. But I don't choose the guests. Please welcome the fantastic Channing Tatum and Jonah Hill."

"When Brad and Angelina see our next two adorable presenters, they're going to want to adopt them. Please welcome Kevin Hart and Ken Jeong."

"There's a female remake of Ghostbusters. There's going to be a female remake of Ocean's 11. And this is brilliant for the studios, because they get guaranteed box office results and they don't have to spend too much money on the cast."

"Women should be paid the same as men for doing the same job and I would like to say now that I'm getting paid exactly the same as Tina and Amy did last year for hosting this - no, I know there was two of them, but it's not my fault if they want to share the money, is it? That's their stupid fault. (pause) It's funny cause it's true."