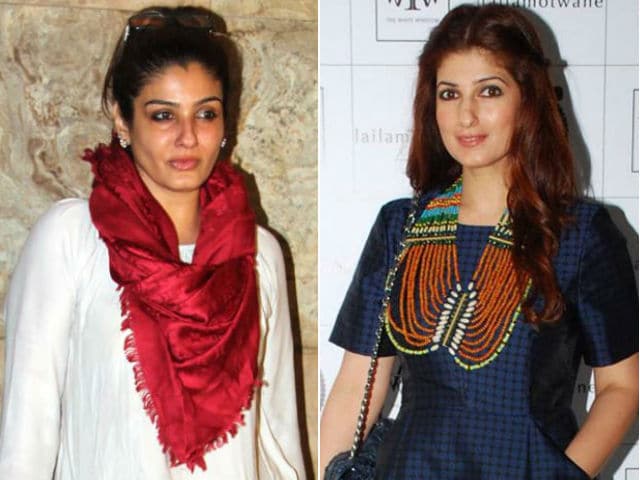 New Delhi: Actress Raveena Tandon and actress-turned-author Twinkle Khanna have a common factor - Akshay Kumar. Raveena and Akshay dated and broke-up during the Nineties and Akshay married Twinkle in 2001. At an event recently, Raveena was asked by a journalist about speculation that Twinkle was offended when she was told last year that she looked a lot like the Mohra actress (more about this later). "Oh, she did? I want to see her comment. Show me what she said. I don't believe that," retorted Raveena Tandon, reported Indian Express. Another reporter rushed to clarify that Twinkle had been joking about being offended. "Then why are you saying offence? We are friends and we all know each other in the industry, we all meet each other regularly. I don't believe what you are saying," Indian Express quoted Raveena as saying.

What really happened was this - when Twinkle Khanna met Arunachalam Murugunantham, inventor of a cheap way to make sanitary napkins, before featuring him in her second book, he told her that she looked like Raveena (by all accounts, Mr Murugunantham doesn't get out much). The Sanitary Man From A Sacred Land, a short story in Twinkle's book The Legend Of Lakshmi Prasad, is based on Mr Muruganantham. She later joked to Hindustan Times, "Was about to drop his story."

So, please note - nobody was offended and all parties involved are friends.

Twinkle Khanna's production house Mrs Funnybones Movies is now producing a film based on Mr Murugunantham, titled Padman and starring Akshay Kumar. Directed by R Balki, Padman also features Radhika Apte and Sonam Kapoor in significant roles. Twinkle Khanna is also the author of Mrs Funnybones, which was her first book and a compilation of her popular columns.

Promoted
Listen to the latest songs, only on JioSaavn.com
Raveena Tandon and Akshay Kumar are co-stars of films like Mohra, Keemat, Daava, Khiladiyon Ka Khiladi and Barood, while Twinkle and Akshay shared screen space in Zulfi and International Khiladi.

Meanwhile, Raveena Tandon is awaiting the release of her revenge thriller Maatr, scheduled for April 21.