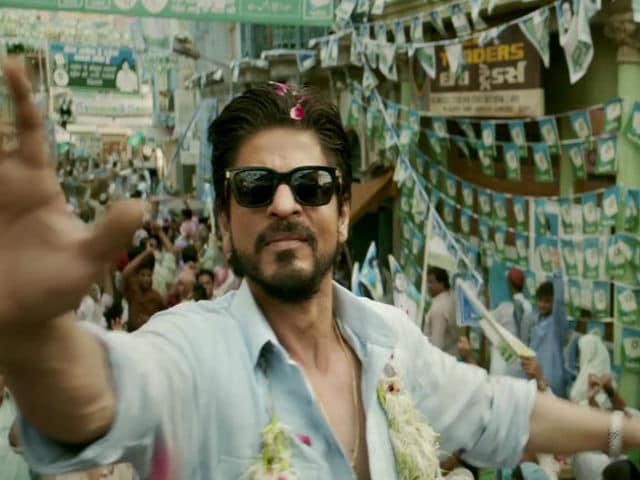 New Delhi: Shah Rukh Khan's film Raees is less than a couple of crores away from the 100-crore benchmark now, with its sixth day earnings bringing the box office total to Rs 98.25 crore, reported Box Office India. On Monday, trade analyst Taran Adarsh tweeted that weekdays would be crucial for both Raees and its rival film, Hrithik Roshan's Kaabil. The first day of the week actually saw a drop in Raees' ticket sales - making only Rs 6 crores versus the Rs 13 crore of last Friday, which was its previous lowest earnings. Box Office India reports Raees' day-wise totals as: Rs 20.25 crore on Wednesday, Rs 26.25 crore on Thursday, Rs 13 crore on Friday, Rs 15.50 crore on Saturday, Rs 17.25 crore on Sunday and Rs 6 crore on Monday.

The 55% drop on Day 6 might indicate that Raees' lifetime total won't reach the exalted heights of Aamir Khan's Dangal and Salman Khan's Sultan, each of which collected much over Rs 300 crore, but Shah Rukh Khan says that's okay. "Why should we compare with only the last big hit, like Dangal and Sultan which are much bigger hits than perhaps this film can ever be. We know that. That comparison from outside, very good. From inside, we know the truth that there is a limit it will go to and if it reaches we will be happy," the 51-year-old star told news agency PTI, adding that Raees had done much better than the team expected.

Promoted
Listen to the latest songs, only on JioSaavn.com
The film has also been reviewed fairly well and on Monday night, there was party to celebrate Raees' crores and stars in Mumbai. Shah Rukh Khan, his castmates Nawazuddin Siddiqui and Sunny Leone, director Rahul Dholakia and producer Ritesh Sidhwani were pictured dancing and having fun.

Raees, in which Shah Rukh Khan plays a Gujarati boot-legger, released on January 25, to cash in on the extended Republic Day weekend.