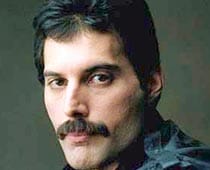 London: Two decades ago, the world of music lost one of its brightest stars -- Freddie Mercury.

Twenty years later, the South Asian community in UK honoured one of its favourite sons at the Asian Awards on Tuesday (October 18, 2011). The awards honour the achievements of individuals born in or with family originating from parts of Asia.

Born in the British protectorate of Zanzibar, East Africa (now part of Tanzania), Freddie Mercury's parents, Bomi and Jer Bulsara, were Parsis originally from the Gujarat region of the then province of Bombay Presidency in British India.

The star's family, as well as his Queen bandmate Brian May, collected the Founders Award in recognition of Mercury's contribution to music. Ironically, Freddie Mercury chose to ignore, even deny, his Parsi heritage while he lived. Even his passport had his stage name.

Was this distancing from his Indian roots deliberate and how did that impact Mercury's music? According to fellow Queen member and friend Brian May, Mercury was committed to a truly global musical sense.

"We had a lot of unconscious influences. Freddie was Indian but also from Zanzibar and less excitingly from Feltham and all these impacted his music," said May.

For Mercury's family, who hailed from a small town in Gujarat but travelled across the world, the fact that Freddie had only an oblique relationship with his country of origin does not bother them in the least. They want Mercury to be remembered by as many people across the world as possible.

"I am still very proud of him. Am glad that he is loved and remembered to this degree even today," Freddie mother Jer Bulsara said.

"Every morning when I wake up., there is a Queen song on the radio and people ask me if it make me sad...the answer is "No". How can I still be sad when my brother is singing me awake!" said Catherine Cooke, Freddie Mercury's sister.

Other big winners at the ceremony, which was held at London's Grosvenor House included comedienne Meera Syal, (Outstanding Achievement in Television) and rapper Jay Sean.

Promoted
Listen to the latest songs, only on JioSaavn.com
Celebrated sitar player Ravi Shankar was named the recipient of the prestigious Fellowship Award.

Freddie Mercury may have ignored even hidden his Indian roots as he climbed to the pinnacle of success in the UK but he was still unconsciously a part of the Bombay (Mumbai) ethos that he grew up in and that became a part of his music. And as the Asian Awards honouring of him shows, India thought of him as one of their own and will never forget the 'champion' singer.