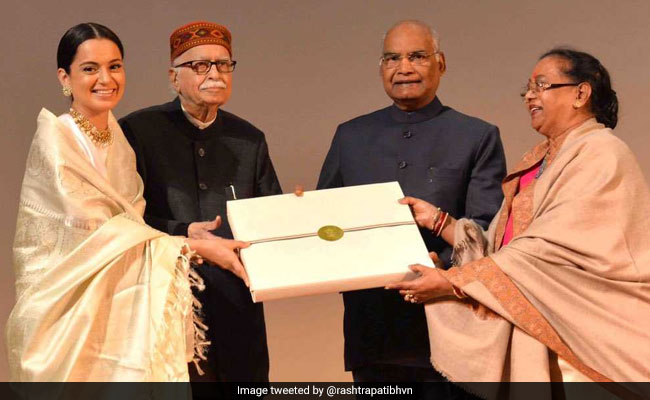 President Ram Nath Kovind watched Kangana Ranuat's forthcoming film Manikarnika: The Queen Of Jhansi at a special screening, which was organised at the Rashtrapati Bhavan in New Delhi on Friday, where the cast of the film was also felicitated. Pictures from the films' screening were shared by the President's official Twitter account on Friday. "President Kovind watched a special screening of the film Manikarnika, based on the life of Rani Lakshmi Bai of Jhansi, at Rashtrapati Bhavan Cultural Centre; felicitated the cast and crew of the film," read the caption on the post. Kangana Ranaut, who plays the titular role in Manikarnika and has also directed a few segments of the film, attended the screening with the film's writer Prasoon Joshi.

Here are the pictures from the Manikarnika screening:

For the special day, film's lead actress Kangana Ranaut opted for an ivory saree. The actress accentuated her look with a choker. Pictures from the screening were also shared on the official Instagram account of the actress' team. "The Queen and the honorable President of India along with eminent leaders, and dignitaries attend the historic screening of Manikarnika at the Rashtrapati Bhavan. A historic moment for the Hindi film industry," read the caption on the post.

A day before the film's screening, a statement was issued by an official from the production house Zee Studios. "We are extremely honoured, glad and proud that the President will be watching this film before its theatrical release," read the statement.

Manikarnika: The Queen Of Jhansi showcases the journey of Rani Laxmi Bai. The film marks the Bollywood debut of TV actress Ankita Lokhande and it also stars Atul Kulkarni, Mishti and Danny Denzongpa in pivotal roles.

Manikarnika: The Queen Of Jhansi will open in theaters on January 25, 2019.